Why did the Kremlin invited European far right "monitors" to "observe" the Crimean "referendum" via its puppet Eurasian Observatory for Democracy & Elections (EODE) led by neo-Nazi Luc Michel?

Obviously, European right-wing extremists are natural allies of Russia's current president Vladimir Putin who is increasingly - and rightfully - perceived as a far right politician. But why did Moscow invite European rather than South American or Asian or African "monitors"? After all, the majority of the countries that voted against the UN resolution, which declared the Crimean "referendum" invalid, - Armenia, Belarus, Bolivia, Cuba, North Korea, Nicaragua, Sudan, Syria, Venezuela and Zimbabwe - are coming from the non-European parts of the world. The overwhelming majority of the countries which abstained from or did not take part in the vote are also non-European.

The truth is that the Kremlin needed to legitimise its invasion in the Crimea, but, in Putin's infinitely racist, far right view, South American, Asian or African "observers" cannot provide legitimacy to the Kremlin's actions. Putin needs white, European people to say "Yes" to his criminal, fascistoid gamble. South American, Asian or African pro-Russian voices are fine for the Kremlin in the virtual world of the UN, but Putin despises them in the real world - they mean nothing to him.

Yet this is not only about Putin's racist worldview as such. By hating the "White West" and at the same time relying on it for the justification of its own actions, the Kremlin reveals its slave mentality. Putin is behaving like a slave who loathes his "racial masters", but is unable to do anything without their consent. 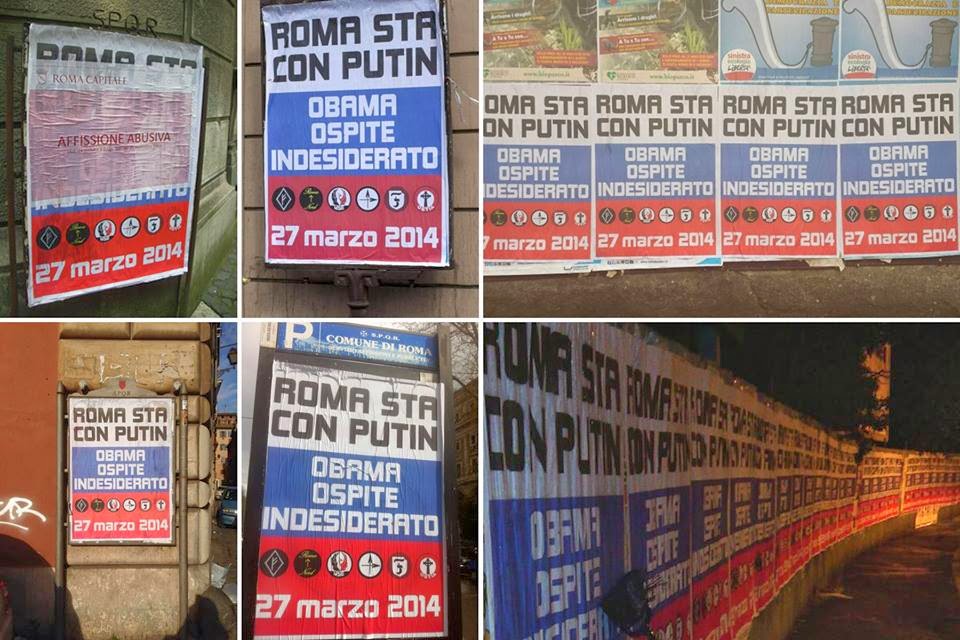 Perhaps with the exception of Roberto Fiore and his Forza Nuova, Italian fascists are strong supporters of Russian imperialism. 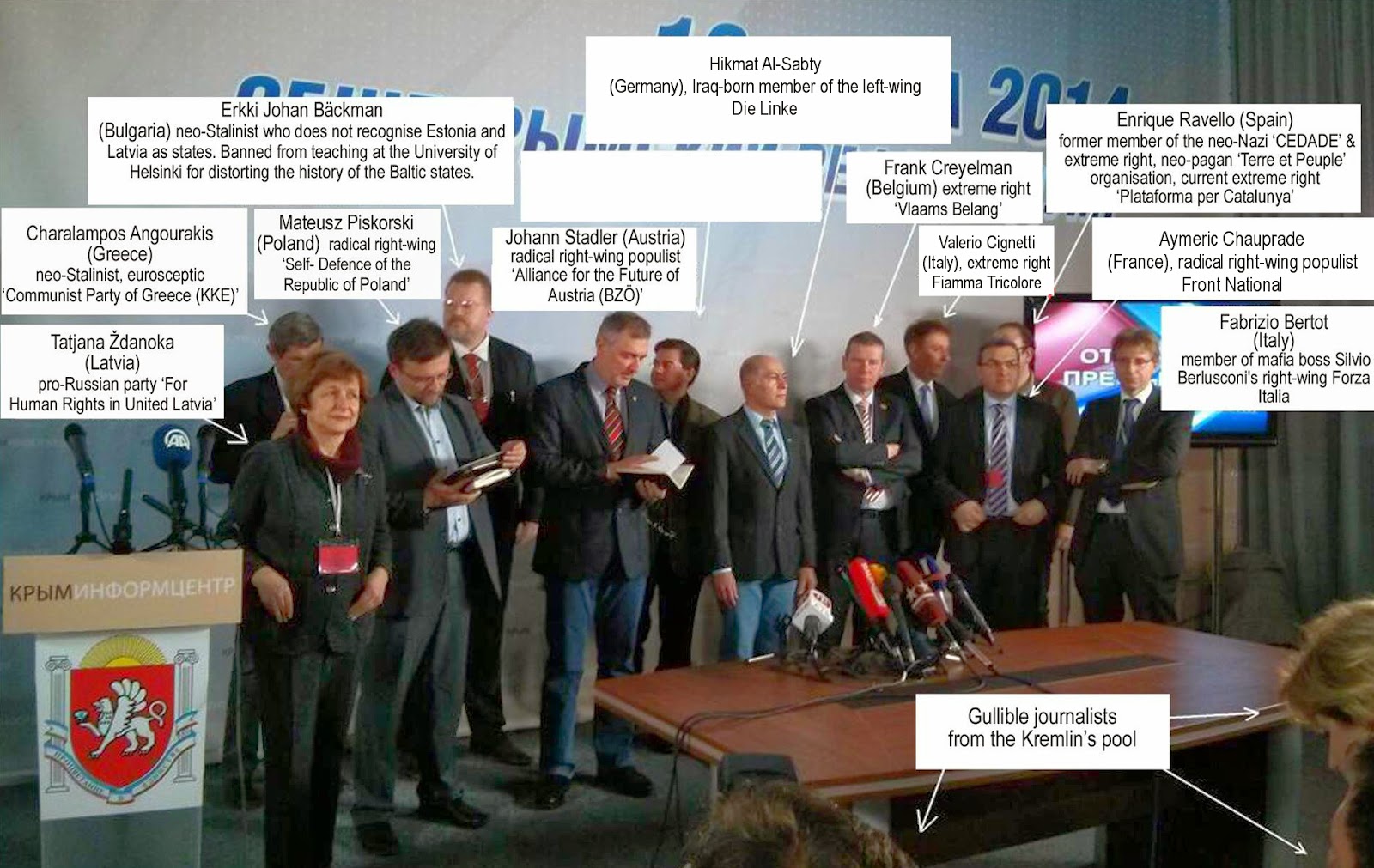 As the readers who are interested in contemporary Ukrainian politics perfectly know, the Austrian police arrested a Ukrainian oligarch Dmytro Firtash who was and possibly still is a backer of former Ukrainian president Viktor Yanukovych. At the moment, Firtash, who was arrested on 12 March on the basis of a US arrest warrant, remains in custody. Austrian authorities set bail for Firtash, at 125 million euros. The payment was transferred on 18 March, but the bank handling the account reported the funds to federal money-laundering investigators, who would check where the money came from. For this reason, Firtash has not been released from custody. The US government is asking Austria to extradite Firtash to the US.

Since the organised economic crime is not the focus of this blog, my interest in the Firtash case is his lawyer, rather than the oligarch himself.* His lawyer's name is Dieter Böhmdorfer (1943) and he is former Minister of Justice of Austria (29.02.2000 - 25.06.2004).

Fascism, "borderless as our lands, and red as our blood"

On the 15th of March, Moscow has witnessed - in addition to the anti-war and anti-imperialist march - a march in support of the Russian military occupation of the Autonomous Republic of Crimea. The latter was organised by the Essence of Time movement founded and headed by Russian National-Bolshevik Sergey Kurginyan. Here are some pictures from the pro-Kremlin march. 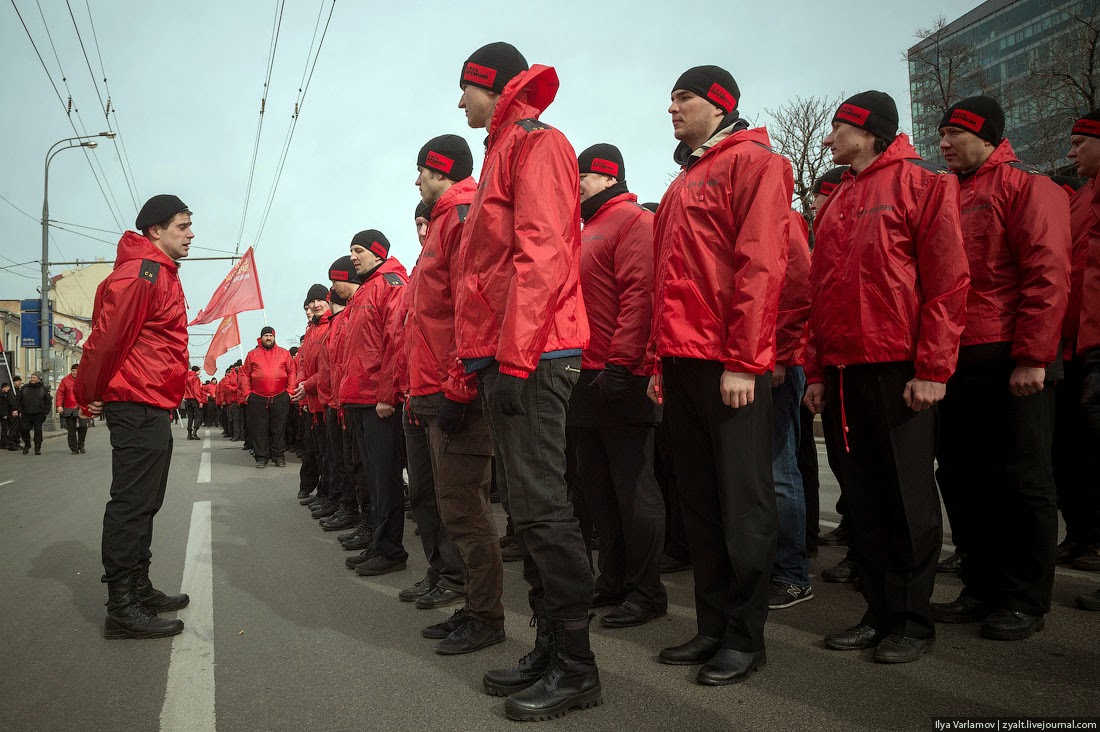 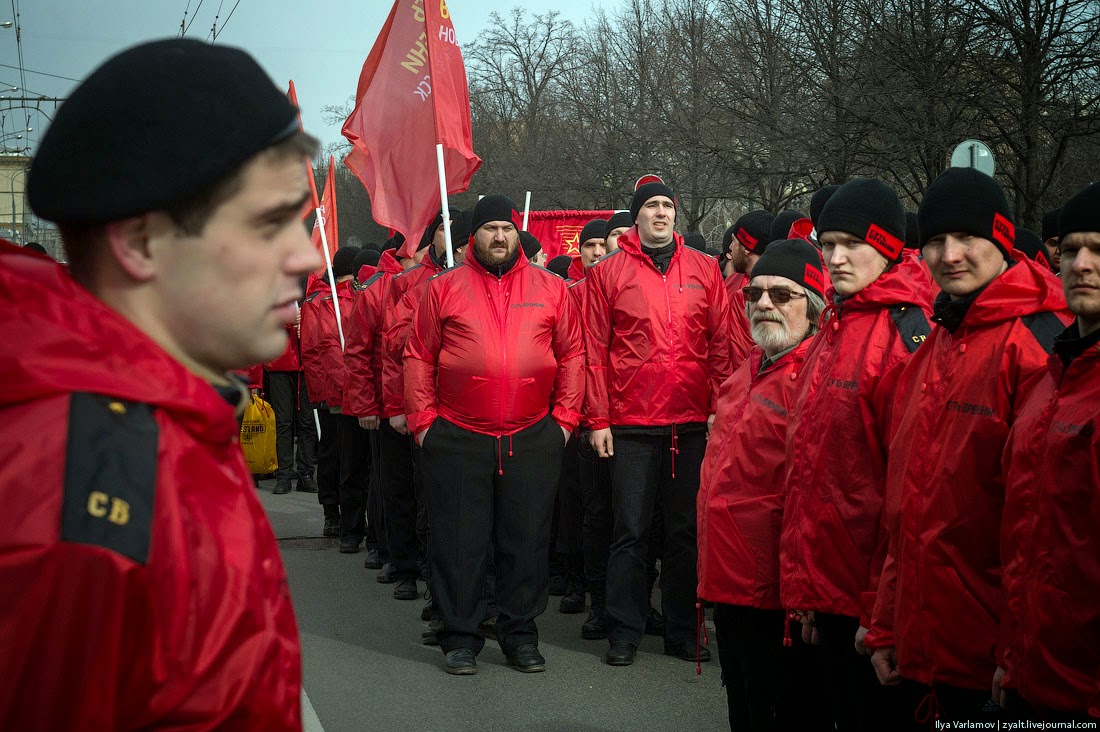 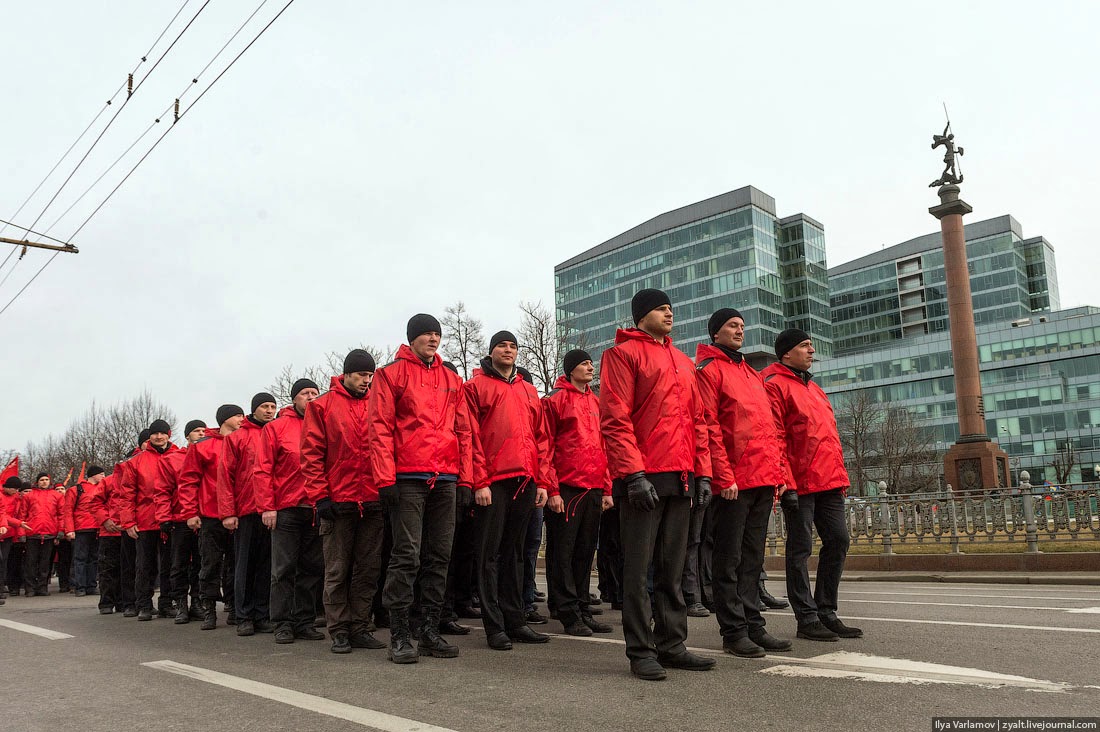 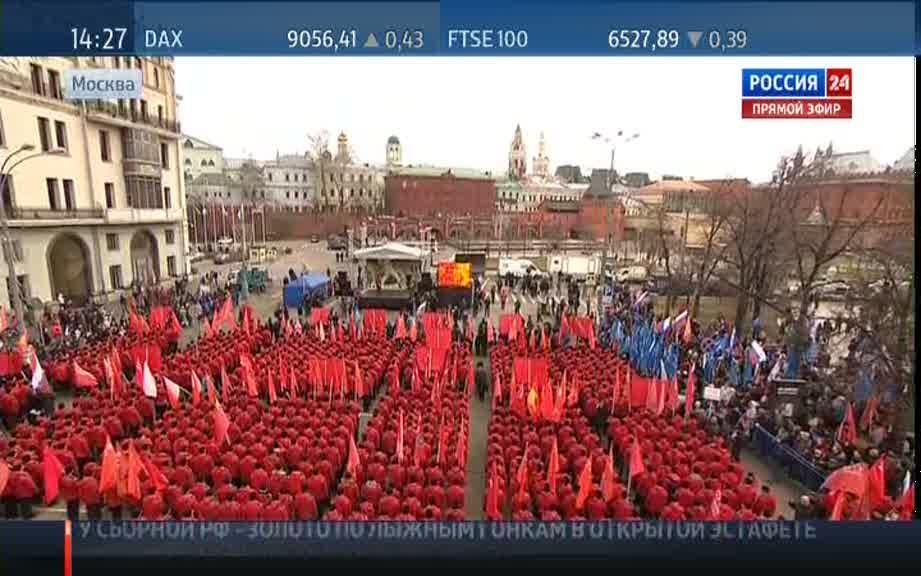 The symbolism of the whole event is best understood by noting a quote from one of the articles by Kurginyan's colleague and ideological ally, Russian fascist Aleksandr Dugin. In his article "Fascism - borderless and red", he wrote (the original quote in Russian can be found below):


Russian socialism should be built by new people, a new type of people, a new class. A class of heroes and revolutionaries. The remains of the party nomenclature and their ramshackle order should fall victim to the socialist revolution. The Russian national revolution. The Russians are longing for freshness, for modernity, for unfeigned romanticism, for living participation in some great cause. Everything that they are offered today is either archaic (the national patriots) or boring and cynical (the liberals).

The dance and the attack, fashion and aggression, excessiveness and discipline, will and gesture, fanaticism and irony will seethe in the national revolutionaries - young, malicious, merry, fearless, passionate and not knowing limits. They will build and destroy, rule and fulfill orders, conduct purges of the enemies of the nation and tenderly take care of Russian elderly and children. Wrathfully and merrily will they approach the citadel of the ramshackle and rotten System sic. Yes, they deeply thirst for Power. They know how to use it. They will breathe Life in society, they will shove the people into the sweet process of creating History. New people. Finally, intelligent and brave. Such as are needed. Who take the outer world as a strike (in the words of Golovin).

Immediately before his death, the French fascist writer Robert Brasillach voiced a strange prophecy: "I see how in the East, in Russia, fascism is rising – a fascism borderless and red".

Note: Not a faded, brownish-pinkish national capitalism, but the blinding dawn of a new Russian Revolution, fascism - borderless as our lands, and red as our blood.

As I wrote in this blog many times, Putin's increasingly fascistizing Russia has long been cooperating with the European extreme right that see in Russia an example to follow.

The illegitimate "referendum" in the Autonomous Republic of Crimea, which was held in this Ukrainian region at the gunpoint of Russian invaders on Sunday, has proven my point again. Supported by the pariah states such as North Korea and Assad's Syria, yet strongly defied by the civilised world that is beginning to understand the terrifying nature of Putin's Russia, the Crimean "referendum" has, however, been hailed as "fair" and "legitimate" by a number of European "election monitors" who have been hired by dubious European structures and who have clear links to the extreme right, extreme left, and pro-Russian organisations/companies.

The main organisation which invited right-wing and left-wing extremists to monitor the Crimean "referendum" is the Eurasian Observatory For Democracy & Elections (EODE). It is headed by Luc Michel (1958) and Jean-Pierre Vandersmissen (???). Both are followers of the major Belgian collaborationist and neo-Nazi Jean-François Thiriart and members of the extreme right Parti Communautaire National-Européen (PCN-NCP).

Growing opposition to Russian Eurasianism even from the European New Right

It is hardly surprising that even some European New Right activists (not to be confused with the party-political far right) slowly start recognising the threat of Eurasianism to Europe.


This interview with Alexander Dugin shows us, that Russia wants, what America has. European vasalls, which follow its interest. But what do we Europeans want? Is all we can do to stand up against Washington to become then vasalls of Moskow? Or will we find the courage to form an independent europe? A Europe of fatherlands.


I support neither FEMEN nor the organised homosexual lobby, both of which have their own agendae, but I do find it rather telling that some Russians accuse their neighbours of being 'fascistic' yet applaud the fact that activists with dissenting opinions are beaten in the streets. Not to mention the fact that Ukrainians in areas containing a high percentage of Russian-speakers are also being viciously attacked. People like Dugin can whine all they like about 'fascism', but it is perfectly clear to see which set of people are really acting like neo-fascist thugs. It is to be hoped that the long-suffering Russian people will rise up and consign this oppressive regime to the dustbin of history.

Russian president Vladimir Putin says that - in case of the full-blown invasion of Ukraine, Russian military forces will be using terrorist tactics. See the video (translation below):


Translation: "We do not intend to fight with Ukrainian people. I want you to understand me clearly. If we make such a decision [to start the invasion], that will only be for the protection of Ukrainian citizens. And let us see if anyone from the [Ukrainian] military shoots at their own people; we will be standing right behind them. Not in front, but behind them. Let them try shooting at women and children".

To remind the readers, Putin invited the Hamas organisation for the talks in Moscow in 2006. Hamas is considered a terrorist organisation by the European Union, USA, Australia, Canada, Israel and Japan. The tactics employed by Hamas include "the deliberate use of civilian homes to hide and/or protect Hamas arms and munition depots and manufacturing sites", and "the unscrupulous use of civilians as human shields against anticipated air-strikes".

Is Putin a new Hitler (in the making)?

His country pompously hosted the Olympic Games and then he decided to annex a part of a neighbouring sovereign country to his own empire on the ground of protecting his compatriots from suffering abroad.

Is his name Adolf Hitler? In October 1939, following the start of the invasion of Czechoslovakia, Hitler declared:


For months the Germans in Sudetenland have been suffering under the torture of the Czechoslovak government. [...] The Sudeten German population was and is a German. This German minority living there has been ill-treated in the most distressing manner.

Or is his name Vladimir Putin? In March 2014, 75 years later Hitler’s speech in Reichstag on Sudetenland and shortly after the Ukrainian revolution ousted the criminal authoritarian regime of Viktor Yanukovych, Russian forces invaded the Ukrainian republic of Crimea, while Putin appealed to the Council of Federation of the Federal Assembly of the Russian Federation:


Apart from these quotes, and the striking similarities between the anthem of the Russian parliament and that of Nazi Germany, there are other reasons to believe that convergences between Hitler’s and Putin’s doctrines are not a coincidence. And here is why.

This is a guest post by Tetiana Bezruk, one of the best researchers of the contemporary Ukrianian nationalism. Scroll down for the Russian version of this article.


Today, the Investigation Committee of the Russian Federation has filed a criminal case against Dmytro Yarosh, the leader of the Right Sector:


The main investigative administration of the Investigation Committee of the Russian Federation has filed a criminal case against the leader of the Right Sector Dmitriy Yarosh on the grounds of crimes outlined in Article 205.2 part 2 and Article 280 part 2 of the Criminal Code of the Russian Federation (public calls for carrying out terrorist and extremist activities with the use of mass media).

On 21 February 2014 at 13:29 (Moscow time GMT+4), LifeNews website published information about the foundation of the Right Sector unit in Kursk. A journalist reporting on Euromaidan protests tells about the nature of far-right groups: "created with NATO support…", "some of them (UNA-UNSO) fought in Abkhazia". Also, according to this journalist, the change of the government in Ukraine may lead to the initiation of withdrawal of the Russian Black Sea fleet and desires of regions that have autonomous status to secede from Ukraine.
Read more »
Автор: Anton Shekhovtsov на 14:27 No comments: