Read this article in German, French, Russian and Ukrainian.

There has been a huge tide of false, incorrect and bloated reports that exaggerate or over-emphasize the significance of the far right in the current Euromaidan protests in Ukraine. A Moscow-based journalist Alec Luhn writes in The Nation about "the Ukrainian nationalism at the heart of ‘Euromaidan’", a leftist Seumas Milne argues in The Guardian that "in Ukraine, fascists, oligarchs and western expansion are at the heart of the crisis", while a self-styled "independent geopolitical analyst" Eric Draitser, in his nauseatingly misleading piece for his own Stop Imperialism (later re-published by The Centre for Research on Globalization), even goes so far as to claim that "the violence on the streets of Ukraine [...] is the latest example of the rise of the most insidious form of fascism that Europe has seen since the fall of the Third Reich".

These and many other similar articles are all written according to the same pattern, and their aim is to discredit the Euromaidan protests as the manifestations of fascism, neo-Nazism or - at the very least - right-wing extremism.

Every single mass political mobilisation in Ukraine has been accompanied by the attempts to compromise the popular uprisings by associating them with the extreme right. And not only uprisings or protests, but big events too. For example, a few weeks before the start of the Euro-2012 football championship, British media hysterically accused Ukrainians of racism and xenophobia, and warned that any non-White person going to see football matches in Ukraine would definitely and immediately be killed. After the championship was over, no British media outlet apologised to the Ukrainian people when it turned out that not one racist incident involving Ukraine fans had been reported during the tournament.

The current campaign to defame the Euromaidan protests is so far the strongest attack on the Ukrainian civil society and democratic politics. Similar attacks took place in the past too, although their intensity never reached today's level. During the "Orange revolution", the Ukrainian semi-authoritarian regime under President Leonid Kuchma was also trying to defile democratic presidential candidate Viktor Yushchenko by associating him with the extreme right. And here is a story that links the past and the present.

In the run-up to the 2004 presidential election, which resulted in a dramatic stand-off between Viktor Yanukovych and Viktor Yushchenko, a certain Eduard Kovalenko, leader of the virtual far right party Ukrainian National Assembly (UNA), declared that he and his party would hold a march in support of Yushchenko as a presidential candidate. Yushchenko's office immediately replied that they never needed that support and did their best to distance from Kovalenko's sordid initiative. Yet Yushchenko's office could not hamper that march and, on 26 June 2004, Kovalenko proceeded: 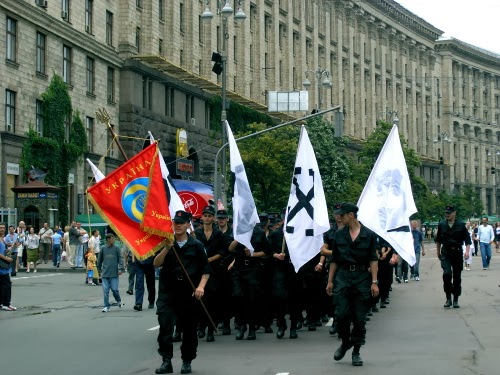 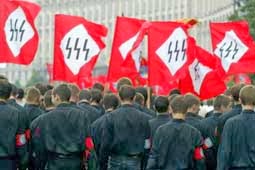 At the meeting that was held after the march, Kovalenko declared: "We, the right-wing nationalist party, are supporting the only one candidate from the right-wing forces: Viktor Yushchenko. One Ukraine, one nation, one people, one president!". And he gave a Hitler salute. 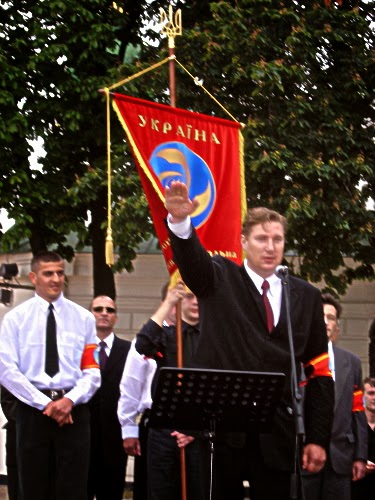 According to Andriy Shkil, then the leader of the UNA-UNSO, the whole event was staged by Viktor Medvedchuk*, then the Head of the Presidential Administration (under President Leonid Kuchma), who was later involved in the electoral fraud in favour of pro-Russian Yanukovych which triggered the "Orange revolution". Medvedchuk was (and still is) also known for his close personal relations with Vladimir Putin who is the godfather of Medvedchuk’s daughter.

Kovalenko's task was simple: by giving support to Yushchenko under the Nazi-like flags, he was expected to discredit the democratic candidate in the eyes of Western observers. Luckily for Yushchenko, however, the Western media largely did not buy into that frame-up and ignored it.

But some Western organisations did not. One of those was the eccentric - and apparently non-existent today - British Helsinki Human Rights Group (BHHRG) not affiliated, despite the name, to the Helsinki Committee for Human Rights. The BHHRG was notorious for claiming that elections in authoritarian Belarus met democratic standards, that Latvia had not been occupied by, but incorporated in, the Soviet Union, that the Romani people of the Czech Republic did not suffer from racism as generally reported, etc. On 24 November 2004, the BHHRG published a report "Shadow of Anti-Semitism over Ukraine’s Disputed Election" in which the authors concluded:


With friends like these [i.e. Eduard Kovalenko and some others] Mr Yushchenko may feel he has all the People Power he needs to seize the presidency, but should OSCE observers, European parliamentarians, Colin Powell and George W. Bush be undiluted in endorsing a candidate with backing from neo-Nazis and Holocaust deniers?

One of the first web-sites to re-publish the report was the very same Centre for Research on Globalization which has recently re-published Eric Draitser's piece on Ukraine to which I referred in the very beginning. Another web-site that re-published the BHHRG report, this time in Russian, was the web-site of the Historical Perspective Foundation headed by Russian national-conservative Natalya Narochnitskaya. Since 2008, she has been heading the Paris-based Institute of Democracy and Cooperation, together with British eurosceptic journalist John Laughland as director of studies. Laughland, described as a "right-wing anti-state libertarian and isolationist", was one of the trustees of the BHHRG.


At least three people who were associated with the BHHRG joined the US-based Ron Paul Institute for Peace and Prosperity: Daniel McAdams (Executive Director of the Institute), Mark Almond (former chairman of the BHHRG) and John Laughland. The web-site of the Ron Paul Institute is full of misleading articles on Euromaidan associating it with the extreme right, and various drivels by Mark Almond (who likes to present himself as "professor of history at Oxford University", but does not even work at Oxford) are particularly prominent (see for example his "Ukrainian Opposition and the West ‘Playing with Fire Siding With Extreme Nationalists'").

The Canada-based Centre for Research on Globalization is also interesting. It was founded and is now headed by Michel Chossudovsky; among the Centre's contributors are Neil Clark, Mahdi D. Nazemroaya and William Engdahl. Chossudovsky, Nazemroaya and Engdahl are members of the scientific committee of the Italian journal Geopolitica, which also includes John Laughland and Natalya Narochnitskaya. Geopolitica is edited by Tiberio Graziani, a fervent advocate of the Eurasian cooperation and a member of the High Council of the International Eurasian Movement led by Russian fascist Aleksandr Dugin. In 2008, Dugin called for the Russian occupation of Georgia, and even made a trip to South Ossetia together with his followers from the Eurasian Youth Union.


Geopolitica itself is an off-shoot from the Italian extreme right journal Eurasia, Rivista di Studi Geopolitici, published and edited by Italian Nazi-Maoist Claudio Mutti. The scientific board of Eurasia includes Aleksandr Dugin and William Engdahl. In the early January, Engdahl published a piece titled "The Belgrade US-Financed Training Group Behind the Carefully-Orchestrated Kiev Protests". 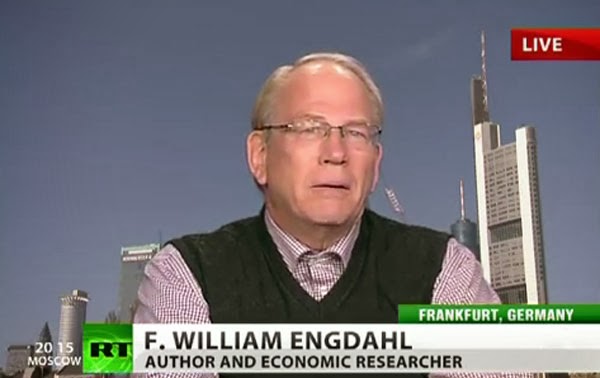 Dugin has been promoting the idea of the destruction of Ukraine and its colonisation by Russia since the early 1990s. He has also been an inspiration for the foundation of the Italian national-socialist organisation Stato & Potenza which openly calls for the annexation of Ukraine to the Russian Federation. Dugin and Mutti have been friends since 1990; Mutti himself is closely associated with Stato & Potenza.


All the above-mentioned people and groups form - apparently a small - part of the wide network which is aimed at promoting anti-Western, pro-Russian and pro-Eurasianist ideas in the EU and the US and Canada. Moreover, the following people from this network are official regular contributors to the Kremlin-sponsored Russia Today (RT) TV:


And these authors are in the pool of political commentators of yet another Kremlin-sponsored media service, the Voice of Russia:


The Voice of Russia's offshoot in France is ProRussia TV which is linked to the French far right National Front and headed by Gilles Arnaud, a former National Front councilor in the Upper Normandy. The National Front's leader Marine Le Pen has received a warm welcome in Russia last summer. Then, in particular, she met Vice-Prime Minister Dmitry Rogozin, who helped found the Institute of Democracy and Cooperation when he was Russia's ambassador to NATO (2008-2011). It was during Rogozin's service in the Russian Mission to NATO when Ukraine and Georgia were denied membership in this organisation.


Commenting on the Ukrainian government's decision not to sign the Association Agreement with the EU, Le Pen said that she was disappointed with the EU interference in the Ukrainian matters and recommended to the Ukrainians not "to join this nightmare", i.e. the EU (although nobody actually discussed Ukraine joining the EU). In this rhetoric, Le Pen was supported by Andreas Mölzer from the far right Freedom Party of Austria, who also suggested - when speaking about Ukraine's rapprochement with the EU - "to take into account the legitimate interests of Russia [which] is very sensitive to everything that happens in her immediate neighborhood [that] includes Ukraine, which, since the time of Peter the Great, was part of the Russian sphere of influence".

The large network consisting of pro-Russian authors and institutions is a hard/extreme right breeding-ground of all kinds of conspiracy theories, Euroscepticism, racism and anti-democratic theories. Today, this is also one of the main sources of the articles, op-eds and statements that are one way or another trying to discredit the Euromaidan protests by associating them either with neo-Nazism or with the alleged US expansionism. The rhetoric of these authors fully conforms to the remarks made by Russian Foreign Minister Sergey Lavrov who has recently slammed Western support for Euromaidan and declared: "What does incitement of increasingly violent street protests have to do with promoting democracy? Why don’t we hear condemnations of those who seize and hold government buildings, burn, torch the police, use racist and anti-Semitic and Nazi slogans?".

Here is a list of selected publications that this Eurasianist Kremlin-inspired network has produced so far:


I don't know if Alec Luhn writing for The Nation or Seumas Milne writing for The Guardian are part of this pro-Eurasianist network. Despite the fact that their message is similar to that of the many articles produced by the pro-Eurasianist authors, they may simply not know what they are writing about. But those people, who have been associated with the British Helsinki Human Rights Group, Ron Paul Institute for Peace and Prosperity, Institute of Democracy and Cooperation, Centre for Research on Globalization, International Eurasian Movement and - I presume - many other similar institutions, which are yet to be revealed, are obviously ideologically driven anti-democratic activists engaged in the anti-Ukrainian and, eventually, anti-European subversive operations.

* - Due to the threats of legal action from Viktor Medvedchuk, I decided to change the wording of the first part of the sentence.