Does the Hungarian and Polish far right anticipate Ukraine's downfall?

On the 3rd of February, two far right organisations, Hungarian Jobbik and Polish National Movement (Ruch Narodowy), issued a joint statement in which they called upon their respective governments "to immediately unite their efforts in applying their foreign and national political means to protect the rights of ethnic minorities living in Ukraine, with special regard for the Polish and Hungarian groups". 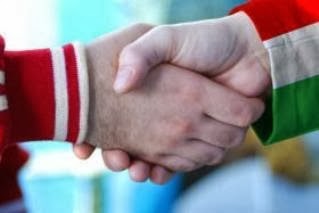 Of all the organisations and movements in Ukraine, the far right Right Sector decided to respond to Jobbik's and the National Movement's statement. In their lengthy reply, they, in particular, said:


We have already stated a few times that that the National revolution in Ukraine does not pose any threat to the local Polish minority in Ukraine. There is no need for any other ethnic minorities to worry, either. Quite the opposite, we feel the state must guarantee their rights to practice their own culture as long as they are loyal to Ukrainians.


The Right Sector seems to support the idea of unity of European nationalists, and, in their statement, one can hear the echoes of the Dutch White Power band Brigade M's song "Europese eenheid":

Our beautiful continent has a bloody history
War, bloodshed and occupation, for whose glory?
With an absolute low, the two World Wars
Where we gave the power to the USA-whores

Hungarians and Rumanians, Germans and Poles
Know the history of territory stolen
Everything that binds us, will never set us apart
And that is why Unity is the very start

Due to the political ignorance, however, the Right Sector is completely unaware of the fact that the idea of unity of European nationalists is a romantic narrative of the far right subculture (and even there it is heavily contested), rather than of the far right party-political agenda. This unity is hardly possible especially in Central and Eastern Europe. This is why there is no cooperation between the Hungarian far right groups on the one hand, and their Romanian or Slovak counterparts. The links between the Ukrainian far right Svoboda party and some Polish ultranationalists was interpreted, in Poland, as a betrayal of national Polish interests. Almost every far right movement in Central and Eastern Europe will have the idea of revision of existent borders in the centre of their ideologies.

Furthermore, the Right Sector seems to have missed a later statement by Jobbik's István Szávay that included a veiled argument that the Hungarian government should take advantage of the unrest in Ukraine and annex Transcarpathia:


Jobbik now considers it particularly important that the Fidesz introduces the strongest national advocacy because the Ukrainian crisis easily creates a historic opportunity to finally reconcile and even solve the situation of Hungarians in Transcarpathia.

Jobbik has always been advocating the idea of reversal of the Treaty of Trianon (1920) which left to Hungary only 28% of the territory of the pre-WWI Kingdom of Hungary, and, obviously, Jobbik is willing to "return" Transcarpathia to Hungary.

During his trip to Moscow in May 2013, Jobbik's leader Gábor Vona met, among others, Russian fascist Aleksandr Dugin who is strong supporter of Ukraine's "decomposition" into several parts with subesquent annexation of some of these parts into Russia. Transcarpathia, according to Dugin, is too alien to Russia, so presumably it could be offered to Hungary.

Vona hates the EU and advocates the Eurasian Union that Putin is willing to establish in 2015: "According to Vona, Hungary must decide within a few years whether to stay with the EU, join a forming Eurasian Union or try to remain independent. One thing is certain [...], the first path is not an option for us, we have no future there. Instead, we must give way to transcendent values and quit the matrix of global capitalism".

Jobbik's pro-Russian/pro-Eurasian rhetoric is hardly surprising, especially given the Kremlin's hatred of Western Ukraine, a part of which, namely, Transcarpathia, could indeed be given "back" to Hungary if the Kremlin succeeded in destroying Ukraine.

Does the Polish National Movement expect similar developments? It is not clear yet, but the Polish far right's frequent use of the term "Kresy", which refers to the former territories of the eastern provinces of Poland (today's western Ukraine, western Belarus and eastern Lithuania), is disturbing. However, given the Polish far right's political insignificance and its mostly negative stances on Russia, I doubt they will be able to engage in the dialogue with the Russians as successfully as Jobbik does.
Автор: Anton Shekhovtsov на 17:10