The Ukrainian protests are about liberty and freedom, and not right-wing extremism

Here's my piece offered to The Guardian's "Comment is free" section, but rejected. I am not surprised because the editors of the "Comment is free" promote only the pro-Kremlin line of the argument. The piece was written 10 days ago.

Almost two centuries ago, in 1822, the National Assembly of Greece, then under Ottoman rule, issued a Declaration of Independence. In particular, it said:


“The war which we are carrying on against the Turk ... is not aimed at the advantage of a single part of the Greek people; it is a national war, a holy war, a war the object of which is to reconquer the rights of individual liberty, of property and honour, rights which the civilized people of Europe, our neighbours, enjoy to-day; rights of which the cruel and unheard of tyranny of the Ottomans would deprive us”.

Had this kind of declaration been written by leaders of a European nation today, the fighters for national independence would have been slammed by two camps. One camp would have been certain pockets of the far left criticizing the declaration for its nationalism and war-mongering. The other camp would have been a certain faction of the far right siding with an oppressor of a subjugated nation. Both camps would have identified the most extreme and violent element of a national liberation struggle and misleadingly extended this element to cover the whole liberation movement. 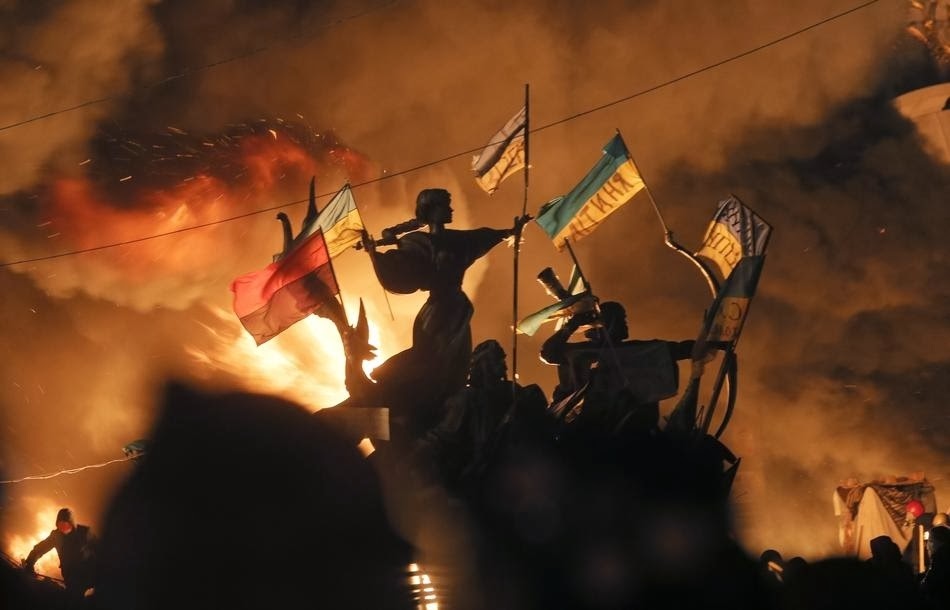 The current protests in Ukraine, collectively known as Euromaidan, are under the double attack from some vocal representatives of the far right and the far left. Their reasoning – albeit coming from two different perspectives – is very similar, and it is possible to establish one common pattern in their articles and commentaries: the Euromaidan protests are taken over by the Ukrainian extreme right; therefore the West should not support Euromaidan.

None of these two camps features experts either on Ukraine or the Ukrainian extreme right. At the same time, more than forty world’s leading researchers of the historical and contemporary forms of Ukrainian nationalism have signed a statement on the liberationist nature of Euromaidan. This statement, while recognizing the presence of the far right in the Euromaidan protests, points to “an increasing number of lay assessments of the Ukrainian protest movement, which, to one degree or another, misrepresents the role, salience and impact of Ukraine’s far right within the protest movement”.

The far right criticizing the pro-European Ukrainian protests can be (necessarily roughly) distinguished between (1) American critics of the US involvement in the Eurasian matters and (2) European right-wing populists.

The first group is represented by the likes of William Engdahl or Webster G. Tarpley; both are former associates of the Lyndon LaRouche movement, described by American researcher of the extreme right Chip Berlet as “a fascist movement whose pronouncements echo elements of Nazi ideology”. Lyndon LaRouche’s wife, Helga Zepp-LaRouche, has herself been quick to refer to Euromaidan as “a fascist coup” which has “been prepared for more than 20 years”.

The second group features such right-wing populists as Marine Le Pen of the French National Front and Andreas Mölzer of the Freedom Party of Austria who are criticizing the EU for “meddling in the Ukrainian matters”. It also includes Hungarian Jobbik and Polish National Movement which have recently issued a joint alarmist statement about the vulnerability of Hungarian and Polish minorities in Ukraine.

Those far left authors who attack the Euromaidan protests for their nationalism are acting in the long-standing tradition of supporting the Soviet/Russian interests against the capitalist West. In the past, they would cooperate with the Soviet soft-power institutions such as the All-Union Society for Cultural Relations with Foreign Countries or the Foreign Commission of the Soviet Writers’ Union. Today, they cooperate – along with the far right – with the Kremlin-sponsored Russia Today TV and the Voice of Russia.

The same left, who have criticized Moscow’s authoritarian clampdown on the Russian LGBT community, anti-Putin protesters and NGOs, remain deafeningly silent about the enormous Russian political and economic pressure on Ukraine, which – combined with the pro-Russian policies of Yanukovych – is the trigger of the radicalization of Ukrainian nationalism.

The Euromaidan protests are essentially pro-democratic, pro-European and multicultural. The Ukrainian far right is only a minor element of these protests, and these groups are very far from exerting any ideological influence on Euromaidan. Neither a joint statement of the human rights NGOs, nor a statement of the Head of the Ukrainian Association of Jewish Organizations and Communities – all these organizations and NGOs have been monitoring xenophobia and racism in Ukraine for many years – has noted a “surge in anti-Semitic and anti-foreigner attacks” related to Euromaidan.

Those who associate Euromaidan with right-wing extremism or overemphasize its role in the pro-European protests have neither understanding of the Ukrainian politics and history nor expertise in the studies of the Ukrainian far right. Sadly, however, their alarmist reports and commentaries legitimize brutal repressions against protesters and work in favour of the westward expansion of authoritarianism.

Read more on the pro-Russian network behind the anti-Ukrainian defamation campaign here.