A report written by Russian fascist Aleksandr Dugin on 17 December 2013 (and published by the Anonymous International) suggests that he has been trying to gather intelligence on the French military circles.

In his report, Dugin describes a closed meeting of the French association "Civisme Défense Armée Nation" (Citizenship, Defense, Army, Nation, CiDAN) that took place at the Klingenthal castle near Strasbourg on 2-5 December 2013. CiDAN was established in 1999 by Admiral Pierre Lacoste, and, as they describe themselves, the association is guided by the "modern vision of patriotism and Europe", and promotes "devotion to the community" and contacts between civil society and the military. Its leadership largely consists of retired or reserve officers, and its president is Lieutenant Colonel Jacques Sonnet.

Writing for Mediapart, Marine Turchi reveals that the far right French Front National (FN) has secured, already in September this year, a 9 million Euros loan from the First Czech-Russian Bank (FCRB). The party led by Marine Le Pen has already received 2 million Euros. The information on the loan to the FN, according to Mediapart, has been confirmed by a member of the FN's political bureau. This development supports my earlier argument that "European right-wing extremists seem to benefit financially from their cooperation with the Kremlin".

As the FN's treasurer Wallerand de Saint-Just explained, the party had been trying to borrow money from a number of French, European and US banks, but was unsuccessful. Eventually, the FCRB proved to be more sympathetic to the French far right cause. "Why not a Russian bank?", asked Christian Bouchet, FN's officer in Loire-Atlantique, French publisher of Russian fascist Aleksandr Dugin and former leader of the National Bolshevik Nouvelle résistance group. "Money does not stink", he added, referring to Roman Emperor Vespasian's justification for a tax on the distribution of urine from public urinals in Rome.

Russians involved in the fake elections in eastern Ukraine

According to the article "Ukraine Tensions Rise as U.S., EU Weigh More Sanctions" that was published by Bloomberg on 13 November 2014, officials from the EU and U.S. meeting in Brussels "will weigh further sanctions against Russia’s economy and Ukrainian separatists, after the reported movement of tanks, artillery and combat troops into eastern Ukraine".

Moreover, "the likeliest first step, they said, is to blacklist Ukrainian separatists and Russians involved in the Nov. 2 elections in eastern regions, which the Ukrainian government considers illegitimate".

I have already posted the list of "election monitors" that travelled to Eastern Ukraine (illegally) and to neighbouring Russian regions to "observe" fake elections for the "Donetsk People's Republic" and "Luhansk People's Republic". The list, to which I refer, is not complete, but this is the most complete list of fake "observers" available today. In this post, I will provide more information on the Russians who were involved in organising the "observation mission" in the Donbass and participated in it.

Who organised the "observation mission"?

From the Russian side, the main group that was involved in organising the "observation mission" is the Moscow-based "Civic Control" Association. "Civic Control" is what can be called a "GONGO", i.e. a "government organised non-governmental organisation", as the groups that compose this association are loyal to the Kremlin, while the key figures in the management of the association are members of – or, at least, closely associated with – the Russian parliament and the Civic Chamber of the Russian Federation. 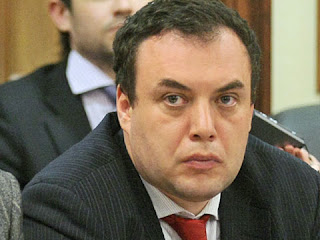 International fake observers of the fake elections in the Donbass arrived in Moscow on the 31st of October and checked in the 5-star Metropol Hotel. They had a late dinner at the hotel restaurant and some of them went for a walk to the Red Square:

Graham Phillips, a controversial British reporter for the Kremlin's disinformation service Russia Today, has interviewed Austrian right-wing politician Ewald Stadler, who is one of the "observers" at "elections" in the Donbass.


According to Stadler, "there is no pressure to the people. Soldiers and people with guns are outside, not inside. Everybody can vote here free".

OK, so Stadler does not see a man in military fatigues standing behind him. So let's help Stadler see something else, shall we?

The "Donetsk People's Republic" (DNR) and "Luhansk People's Republic" (LNR), which are officially considered terrorist organisations by the Ukrainian authorities, will hold "parliamentary elections" on Sunday, 2nd of November, on the territories occupied by them with the help of the Russian army.

These "elections" are widely considered illegal and illegitimate, and UN Secretary-General Ban Ki-moon deplored "the planned holding by armed rebel groups in eastern Ukraine of their own “elections” on 2 November, in breach of the Constitution and national law" adding that "these “elections” will seriously undermine the Minsk Protocol and Memorandum, which need to be urgently implemented in full".

Nevertheless, the Kremlin is said to be willing to recognise these "elections", yet again completely dismissing the advice from the UN let alone defying the laws of Ukraine that Russia has invaded in February-March 2014. The DNR/LNR "elections" will not be recognised as legitimate either by the EU or the US that threaten Russia with further sanctions for undermining Ukraine's independence and sovereignty.