White Rex is many things. First of all, it is a clothing brand established by Denis Nikitin that produces t-shirts, hoodies and accessories with (sometimes disguised) fascist symbols.

Second, White Rex is actively engaged in organising mixed martial arts (MMA) tournaments in Russia and in Europe. In 2013, White Rex organisied a MMA tournament in Rome; one of its guests was Erich Priebke, a convicted war criminal and former SS Hauptsturmführer who died later that year. 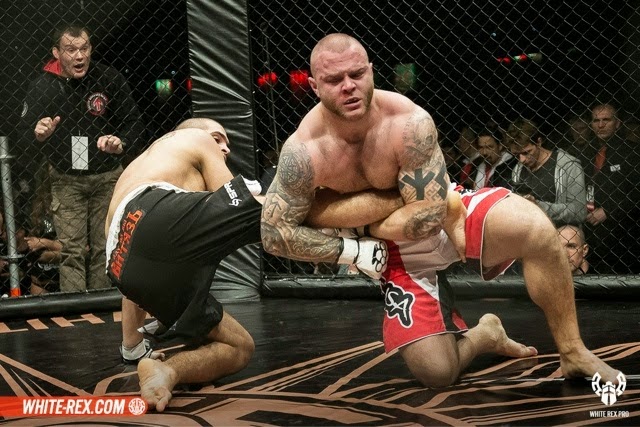 It is, perhaps, through this particular activity that fighters affiliated with White Rex provide fitness ­sessions to British neo-Nazis at training camps in Wales. According to Gerry Gable, White Rex's owner Denis Nikitin is the key trainer there. Gable also reminds us that Nikitin was one of the speakers at the far right Iona London Forum meeting held by the Traditional Britain Group in late August. "Video of speakers at these meetings is usually posted on the internet, but he was the only one who refused to have his face filmed. Before travelling to the UK he trained two fascist groups in Italy".


Nikitin's presentation at the Iona London Forum meeting was titled "White Rex: The Warrior Spirit of Russia's Street Activists". His talk was described by the organisers of the meeting as follows:

Denis Rus is a Nationalist for all Nations and a Patriot for all Patrias. He realizes that if 'The War For The Survival of The White Race' is to be successfully fought, then it is vital that we create leaders capable of leading us to Victory.
To that end he has dedicated himself to improving the skills, knowledge, understanding, self-confidence and self-awareness of Nationalists in Russia and throughout the World. Training in Martial Arts, fitness, adventure pursuits, survival skills, team-building and the organizing of competitions are some of the ways he does this.


(It is interesting to note that the Traditional Britain Group invited Russian fascist Aleksandr Dugin to speak at one of their conferences in October 2013. As I wrote earlier, Dugin's organisation Eurasian Youth Union provided training - at least since 2006 - to pro-Russian extremists who would be engaged in separatist activities in Eastern Ukraine in 2014.)

As it becomes clear now, White Rex is also a movement that propagates neo-Nazi and racist ideas. According to the doctrine of White Rex -


White peoples of Europe, falling to onslaught of propaganda of alien values, lost the spirit of a path-breaker, the spirit of a fighter, the Spirit of a Warrior! One of the main objectives of White Rex is to revive this spirit. Modern society brings up philistines and consumers; yet we want to see WARRIORS - people who are strong morally and physically.

White Rex also promotes, and (co-)organises gigs of, White Power bands such as Moshpit, Brainwash, Prezumptsiya nevinovnosti (Assumption of Innocence), and, especially You Must Murder.


Among activists who popularise White Rex in Russia and elsewhere one can name Roman Zentsov, the leader of the extreme right Soprotivlenie (Resistance) group. White Rex is also closely cooperating with Sergey Badyuk, a former KGB/FSB operative who became a businessman in the 1990s, but still provides training to the special forces of Russia's Main Intelligence Directorate.

British anti-terror police and the Home Office may want to keep a close watch on White Rex and Russian citizens mentioned in this article.