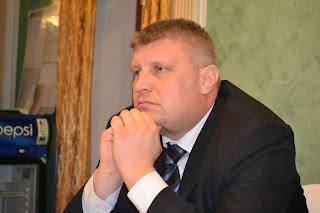 French and Austrian radical right-wing leaders have recently declared that the EU should not interefere in Ukraine's national sovereignty. Some may consider these statements as a spit in the face of the Ukrainian radical right-wing Svoboda party, which today supports Ukraine's European integration, but in fact these statements reveal a bigger picture.

Dmytro Korchyns'ky, the leader of the far right Bratstvo party, which was one of the organisations behind the attacks on the Presidential Administration, is said to be on the wanted list. Moreover, he is said to have fled to Russia.

The police refused to arrest him for several days, so if he is indeed now hiding in Russia, he had plenty of time to go to there without any fear of being arrested by the Ukrainian police on the border with Russia. 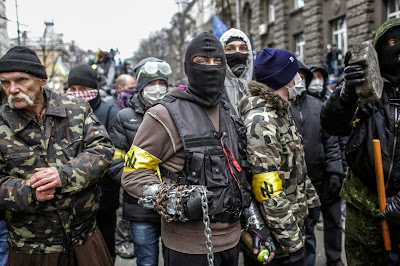 Were disturbances on the Maidan the work of provocateurs or Ukrainian ultra-nationalists?

A few extra-parliamentary extreme right groups took part in the attack on the President Administration in Kyiv today. Currently, there is no one reason to believe that these groups were somehow associated with the parliamentary radical right-wing Svoboda party or even with its paramilitary neo-Nazi units like C14.

One of these groups is "Tryzub" (Trident), which was originally formed as a paramilitary unit of the Congress of Ukrainian Nationalists but then became an independent organisation.

Also seen by the President Administration is Dmytro Korchyn'sky, leader of the "Bratstvo" (Brotherhood) party. Korchyns'ky is widely considered an agent provocateur, and his "Bratstvo" already took part in several actions that were meant to provoke police suppression of peaceful protests. Moreover, it is said that Korchyns'ky taught a course at the explicitly pro-Putin "Seliger" summer camp in Russia.