This "logical and natural geopolitical model" implies the division of Ukraine into several "zones", the majority of which will be directly controlled by Moscow.

In Ukraine, this model is now being promoted by a number of "strategists" and "political technologists". Yuriy Romanenko, a co-author of the article on "the scenario of the peaceful divorce of Ukraine", is one of them.

Romanenko is a Ukrainian"political technologist", who has long been interested in Dugin's geopolitics. In 2008, he wrote "The manifesto of the middle class" which started the "Dostali" ("Sick and tired") campaign that was meant to advance a populist idea that no politican can be trusted. Ultimately, this campaign was meant to damage the already weakened "Orange coalition" and multiply the chances of Yanukovych's success in the 2010 presidential election. In 2009, Romanenko also co-founded a similar populist "civic initiative", called "Get' usikh!" ("Down with everyone!"), which was launched by Yuriy Zbitnev and Dmytro Korchyns'ky.


In 2011, Romanenko, Zbitnev and Oleksiy Komarov (he co-authored the above-mentioned piece on the "peaceful divorce of Ukraine") took part in Yanukovych's Administration's attack on the Ukrainian oligarchs who were not affiliated with Yanukovych's "Family".


I have already mentioned Korchyns'ky and his links with the Russian authorities and their Ukrainian appointee Viktor Medvedchuk. Zbitnev is no less interesting. He is a "political technologist" too, but also the leader of the miniscule far right Nova Syla (New Force) party.

However, Zbitnev's leadership of the Nova Syla party and his friendship with Korchyns'ky are not the only links to the Ukrainian extreme right. Zbitnev has been also very close to the extra-parliamentary Social-National Assembly (SNA), and he participated in many joint events with the SNA and Korchyns'ky's Bratstvo party.


On the 1st of December 2013, SNA activists took part in the violent attack on the Presidential Administration which was meant to provoke a police suppression of the protests. 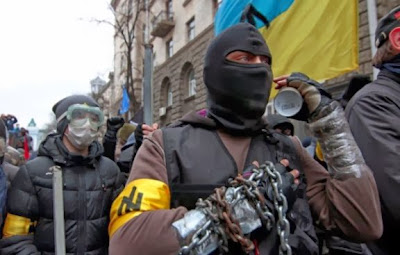 Provocations by the Presidential Administration and calls for the division of Ukraine are two sides of the same bad coin: the activities of Korchyns'ky, Romanenko, Zbitnev, and other right-wing extremists are inciting hatred, divisions, and fomenting civil war in Ukraine, and are eventually implementing the geopolitical strategy of Russian fascist imperialists. Korchyns'ky is already hiding in Russia, but he was not the only agent provocateur whose activities are very dangerous for Ukraine.
Автор: Anton Shekhovtsov на 16:09