Dmytro Korchyns'ky, the leader of the far right Bratstvo party, which was one of the organisations behind the attacks on the Presidential Administration, is said to be on the wanted list. Moreover, he is said to have fled to Russia.

The police refused to arrest him for several days, so if he is indeed now hiding in Russia, he had plenty of time to go to there without any fear of being arrested by the Ukrainian police on the border with Russia. 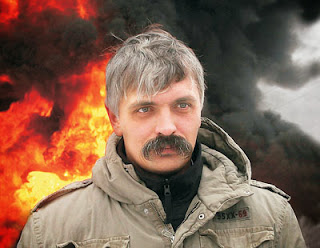 Discussing the provocative activities of Korchyns'ky's Bratstvo, it is worth remembering, in particular, the 2012 parliamentary elections. Only one member of Bratstvo, Dmytro Lin'ko, took part in the elections in a single member district in Kirovohrads'ka oblast (he obtained 0.21% of the vote). However, since the party was nominally taking part in the elections, it had a right to send its representatives to District Election Committees (OVK). Not all the parties could eventually send its representatives to OVKs, as the Central Election Committee held a draw to determine which parties would be represented in OVKs.

Representatives in OVKs, its heads, secretaries and deputy heads are always crucial in the process of stealing elections. Given Korchyns'ky's history as an agent provocateur, the reasons as to why a miniscule party, which ran only one candidate, got as many representatives in District Election Committees as the ruling party, seem perfectly clear.
Автор: Anton Shekhovtsov на 03:33