A new book: Eurasianism and the European Far Right

Lexington Books published a volume Eurasianism and the European Far Right: Reshaping the Europe-Russia Relationship edited by Marlène Laruelle, to which I contributed two chapters. 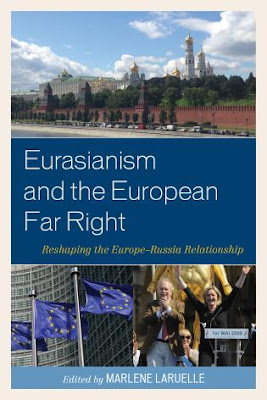 A statement on the developments in the Ukrainian town of Mukacheve

Members of the Ukrainian, anti-European far right organisation Right Sector have killed one civilian and injured four more, as well as injuring six policemen, using Kalashnikov rifles and a heavy machine gun, in the West Ukrainian town of Mukacheve.

As I have argued previously in this blog, the overwhelming majority of Ukrainian far right organisations are criminal gangs that exploit a radical right-wing ideology for mobilisation purposes. The incident in Mukacheve seems to be an example of a criminal (far right) group trying to hijack an illegal business operated by another (non-political) criminal gang.

The anti-Semitic demo in London - a Moscow's KGB-style psy-op?

As the readers of this blog perfectly know, the Kremlin is actively cooperating - sometimes financially - with European far right parties. However, Moscow may also be engaged in even more sinister activities, namely whipping up racial hatred in the West in order to discredit democratic societies that have taken a strong position on sanctions against Russia for its war on Ukraine.

While it cannot be conclusively proven yet, the "anti-Jewification" demonstration that took place in London on 4 July might be an example of such activities. At least, there are sound reasons to suspect exactly this.

The demonstration was organised by the neo-Nazi Eddy Stampton who is notorious for drunken violence towards women, and was attended, among others, by his neo-Nazi mate Piers Mellor; the head of the far right IONA London Forum Jeremy "Jez" Bedford-Turner; and Britain-based activists of the Polish fascist National Revival of Poland (Narodowe Odrodzenie Polski).