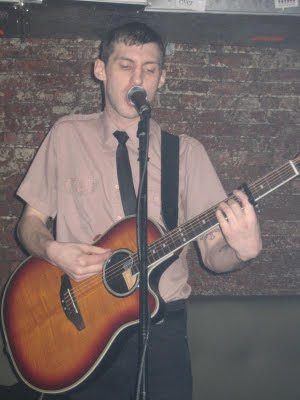 If you enlarge the image of this Cult of Youth guy, you will see an element of the tattoo on his left hand. This is a Star of Chaos. Although this symbol originates from Michael Moorcock's fantasy books, it was actually popularised through role-playing games, especially the Warhammer 40K series. It is also interesting that the Star of Chaos is now widely used among the European New Right (who can be considered "metapolitical fascists"), see for example Troy Southgate's Tradition & Revolution forum or Aleksandr Dugin's International Eurasian Movement's web-site.
Автор: Anton Shekhovtsov на 11:27 19 comments:

I think that the topic of the conference, as well as the conference papers themselves, is revealingly indicative of the European academia's endeavours to understand humanity's prospects of spiritual (or "spiritual") development in a world where such terms as "spirituality" and "sacredness" have acquired so many meanings that it is no longer possible to be sure whether a person you are speaking to (in the same language!) agrees on meanings of the words you choose. Hence, the "modernities".

And, yes, the European academia, although there were scholars from the US and Australia. It's the Europeanised world, and the conference was Eurocentric. I don't see any trouble with that really. The call for papers was available for everyone after all.

The Feast of Disobedience: Orange Gifts and the Sacred Birth of a Modern Ukrainian Nation

I tried to put aside my "political science expertise", if any, and focus on the ritualistic nature of the Ukrainian "revolution", its development outside the protest activities. The whole conference was recorded by the Academic Service unit of the Backdoor Broadcasting Company that specialises in web-casting academic conferences, symposia, public lectures, workshops and seminars in order to further the dissemination of academic research. So, all the podcasts of the conference papers are freely available through their web-site. Here's a direct link to my paper. I guess it is my only paper in which I did not actually use the word "fascism"! A nice departure, yeah. (Not permanent, of course.)
Автор: Anton Shekhovtsov на 20:40 1 comment: