Marine Le Pen Is No Patriot of France

In the beginning of the 1980s, Belgian post-war neo-fascist ideologue Jean Thiriart wrote that he wanted to see the formation of a Euro-Soviet Empire, a fascist-communist super-state that would stretch from Vladivostok to Dublin. He believed that Moscow could “make Europe European” as an antithesis to what believed was an Americanised Europe, and was ready for “total collaboration” with the Soviet Union.

He was no stranger to “total collaboration”, as he served in the Waffen SS in the 1940s and was convicted for his collaborationism with the Third Reich after the war, but in the 1980s he would swear allegiance to a different totalitarian regime: “I will then be the first to put a red star on my cap. Soviet Europe, yes, without reservations”.

Thiriart’s dreams never came true, but he has followers who would collaborate with the authoritarian regime of Vladimir Putin who, they believe, would also “make Europe European”. These are extreme right activists and politicians who see in Putin’s Russia “a bastion of traditional values” and “a beacon of hope” in their fight against liberalism and united Europe.
Putin’s regime, in its turn, uses his extreme right allies to weaken the European Union and undermine social peace in European societies. Putin knows well that nationalist movements are dangerous for social and political unity of states, and his regime suppresses not only democratic opposition in Russia, but also ultranationalist movements that are disloyal to official Moscow. To Putin’s European extreme right allies this may come as a surprise, but he urged Russian nationalists to “remember that Russia was formed specifically as a multi-ethnic and multi-confessional country”, and argued that any nationalism in Russia destroy the Russian “genetic code”. And yet Moscow would cynically provide political, media and sometimes even financial support to ultranationalist parties, because were they to come to power in particular European states, they would compromise European unity and, therefore, make their respective states more vulnerable to corrupt practices of Russian oligarchs, which would contribute to social inequality, and damage Europe’s positions in the global competition among major powers such as the US, China and India.

If European extreme right parties understood that Europe owed much of its strong international standing to Western unity, they would at least refrain from calling themselves “patriotic” because patriotism has nothing to do with suicidal attempts to cut the ground from under their own feet. And yet self-proclaimed “patriotic” political forces such as the Freedom Party of Austria, Italy’s Northern League, Bulgaria’s Attack, Alternative for Germany and France’s Front National appear to be particularly naïve as they implicitly strive to undermine Europe’s security and explicitly demonstrate in whose favour they do it: Putin’s authoritarian kleptocracy.

In December 2016, the Austrian Freedom Party even signed a coordination and cooperation agreement with Putin’s United Russia party, while the Northern League signed a similar, yet less extensive coordination agreement with the same Russian party in March this year. Marine Le Pen has travelled to Moscow several times since 2013, and her Front National obtained a multi-million loan from the First Czech-Russian Bank controlled by one of the businessmen from Putin’s inner circle.

Marine Le Pen claims in her presidential campaign video that she wants “the French to live freely in an independent France”, but her foreign policy orientations suggest that she would be willing, like Thiriart before her, to make France dependent on Russia. Since 2013, it has been obvious that her views on international relations, especially those related to Russia, were guided by the Kremlin’s positions on those issues. For example, in June 2013, during her visit to the Ukrainian city of Sevastopol – at that time not yet annexed by Russia – Le Pen supported the Ukraine-EU Association Agreement, but, after her first ever visit to Moscow the same month, she would denounce Ukraine’s rapprochement with the EU and vote against the Association Agreement in the European Parliament. Since Le Pen started meeting Moscow’s officials on a regular basis, no Russia-related statement of hers has ever conflicted with the Kremlin’s line: neither on Putin’s repressions of domestic democratic opposition, nor on the Russian invasion of Ukraine or Moscow’s support of the murderous regime of Bashar al-Assad.

Not that by repeating Moscow’s disinformation Le Pen pays off the debt to the Kremlin; rather, she appears to echo Moscow’s narratives because she simply hopes to have continuous Russian financial support. Thus, Le Pen seems to lack not only her own views on international relations, but also self-respect. She wanted to meet someone from the Russian ruling elites already in 2011, but no Russian high-ranking official wanted to invite her to Moscow, because the Kremlin waited for the outcome of the 2012 presidential election in France. The Russian authorities aspired to have good relations with either François Hollande or Nicolas Sarkozy – relations that could have been potentially damaged, had the Kremlin invited Le Pen, and demonstrated political support for her, before the presidential election. It was only after President Hollande criticised Putin, in June 2012, for his support of Assad that the Kremlin decided to play rough on France and build relations with the Front National to destabilise social peace in the country.

But in 2016, Le Pen became a fall-back option for the Kremlin, and for this very reason the Front National not only failed to obtain another loan from a Russian bank that year (the First Czech-Russian Bank went bankrupt in 2016), but also started having problems with the Russian Deposit Insurance Agency that managed contracts of that bankrupt bank and threatened to recover the loan from the Front National through legal action. Given the fact that the Deposit Insurance Agency is a state-controlled institution, it is inconceivable that its position vis-à-vis the Front National was not coordinated with the state authorities.

The Front National became a fall-back option for the Kremlin, because Moscow adopted a wait-and-see attitude towards the political developments in France and, after the Republican primaries, decided that it would support François Fillon, who is known for his soft stance on Russian domestic and international policies, rather than Le Pen. And only after Fillon started losing popularity because of the “Penelopegate” did the Kremlin, again, decide to turn to Le Pen and even invite her to Moscow to demonstrate who Putin’s preferred candidate in the French presidential election was.

After Moscow’s apparent interference in the US presidential election last year, European societies have become more vigilant about the Kremlin’s attempts to influence political processes in the West. France is hardly an exception here. 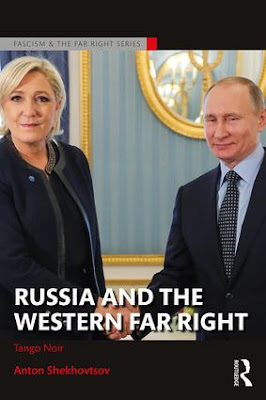 My new book, Russia and the Western Far Right: Tango Noir, will be published on 30 September 2017 and is already available for pre-order via Routledge, paperback at £17.59.
Автор: Anton Shekhovtsov на 10:38