A letter to a Friend on Tolkien, racism and the European New Right

As I told you before, I would love to share with you some thoughts on the cultural links between Tolkien and the European New Right (ENR). Perhaps, these thoughts are not new and eventually commonplace for you, but even if it is so, maybe you can clarify some points.

I agree with you completely that the notion of mythical time expressed in Tolkien’s works was and still is the major reason of the adoption of his ideas by the ENR. Of course, the nostalgia, as you write, for "a total world view [and] a holistic understanding of existence, warm and 'alive'" is crucial to the ENR. In Tolkien’s works one can also find references to the four Yugas, which are important to the ENR influenced by Integral Traditionalism of René Guénon and some others: "the Ainulindale", "the Years of the Lamps", "the Years of the Trees" and "the Years of the Sun". However, I believe that Tolkien’s racism is also important for the ENR.

As far as I understand, the problem of Tolkien’s racism is contentious. On the one hand, Tolkien did speak against racial prejudices. As Roger Griffin writes in his "Revolts against the Modern World", Tolkien "declared in his valedictory Address at Oxford that he had the 'hatred of apartheid in (his) bones'". Moreover, when he was asked by a German publisher (who wanted to translate The Hobbit into German) if Tolkien was Aryan in origin, the author commented:


I must say the enclosed letter from Rutten and Loening is a bit stiff. Do I suffer this impertinence because of the possession of a German name, or do their lunatic laws require a certificate of “arisch” origin from all persons of all countries? Personally I should be inclined to refuse to give any Bestatigung (although it happens that I can), and let a German translation go hang. In any case I should object strongly to any such declaration appearing in print (From a letter to Stanley Unwin, 25 July 1938).

[...] if I am to understand that you are enquiring whether I am of Jewish origin, I can only reply that I regret that I appear to have no ancestors of that gifted people (To Rutten & Loening Verlag, 25 July 1938)

On the other hand, in Tolkien’s books, there are plenty of references to the idea of racial and ethnic differentiation as such, and, besides, these racial/ethnic groups differ in their inherent abilities. There’s a good article on this issue, in which the authors – with the reference to Dr. Stephen Shapiro – write that, in Tolkien’s world, "the fellowship is portrayed as uber-Aryan, very white and there is the notion that they are a vanishing group under the advent of the other, evil ethnic groups".

All the authors who charge Tolkien with racist attitudes mention the Orcs. This race is obviously the most wicked in his world. Usually the following statement of Tolkien is quoted:


The Orcs are definitely stated to be corruptions of the "human" form seen in Elves and Men. They are (or were) squat, broad, flat-nosed, sallow-skinned, with wide mouths and slant eyes: in fact degraded and repulsive versions of the (to Europeans) least lovely Mongol-types (From a letter to Forrest J. Ackerman [Not dated; June 1958]).

There’s another interesting quote from one of his letters. When Tolkien was asked "if the notion of the Orcs, an entire race that was irredeemably wicked, was not heretical", he replied:


With regard to The Lord of the Rings, I cannot claim to be a sufficient theologian to say whether my notion of orcs is heretical or not. I don't feel under any obligation to make my story fit with formalized Christian theology, though I actually intended it to be consonant with Christian thought and belief, which is asserted somewhere, Book Five, page 190, where Frodo asserts that the orcs are not evil in origin. We believe that, I suppose, of all human kinds and sons and breeds, though some appear, both as individuals and groups to be, by us at any rate, unredeemable... (From a letter to W. H. Auden, 12 May 1965) 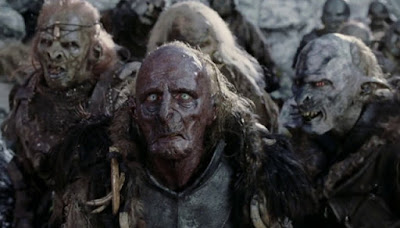 I think that the last sentence casts light on Tolkien’s perception of races (not only in his imaginary world, but also in the real world). It seems to me that Tolkien (1) acknowledges the existence of distinct anthropomorphous/human races, (2) considers that different races have their own innate abilities, (3) believes that no race is naturally evil in its origin, but (4) admits that it is normal for "us" (Europeans) to consider some races as wicked. If this assumption is true, then Tolkien's racism is actually a mixture of two racisms – biological and cultural.

It is also interesting that cultural racism prevails over the biological one, because Tolkien actually realizes that all the races are equal in their rights and have equal opportunities for salvation. This reminds me of the "new racism" of the ENR. Even if we ignore Tolkien's notion of the Orcs, his Middle-earth is in fact an ENR's paradise, where all the anthropomorphous races/ethic groups live in their predetermined lands and do not – as well as cannot – mix with each other. It's not the point that Men are better/worse than Hobbits, or Elves, or Dwarves. They simply cannot not mix and it seems that everyone enjoys this inability. At least, no one complains.

So, the ENR’s fascination with Tolkien is probably based on the idea of the existence of the heroic era when "people" shared the total world-view and where the races – due to their proper perception of the laws of nature – lived in a world organized according to the logic of ethnopluralism.