The power of the non-partisan protests is indeed amazing, and we can witness fantastic examples of self-organisation via social networking websites and offline. It's almost a perfect case of horizontal forms of organisation and leaderless resistance. 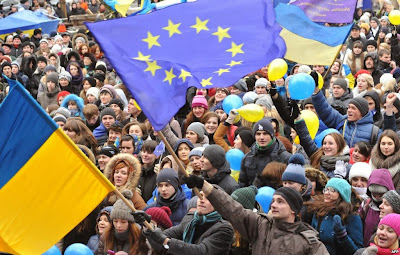 One reason why the civil society is so strong now is the lesson drawn from the failure of the "Orange revolution", and this lesson tells people not to rely too much on politicians, not to put too much trust in them like they did with Yushchenko. Ukrainians were apathetic about domestic politics for several years now, but once they rebelled, they may now want to go all the way (whatever this means for individual protesters).

(The _uncivil_ society [first and foremost, the extra-parliamentary extreme right] is problematic too. It is, fortunately, not as strong as the civil society, but it is already causing serious problems.)

Even if the protesters are ready to support the opposition at early or regular elections, the civil society needs guarantees that it will have a strong say in the process of Ukraine's development after the opposition - sooner or later - takes power. This can be done through clear and unambiguous promises of power decentralisation, re-establishing of parliamentary democracy, establishing of social councils, strengthening of the NGOs and trade unions, etc.
Автор: Anton Shekhovtsov на 14:00