Svoboda was excluded from the Alliance of European National Movements?

In October 2012, the website of the Hungarian extreme right Jobbik party pubished a report on a two-day congress of the Alliance of European National Movements (AENM) held on 20-21 October 2012 in Hédervár, Hungary. It was an important congress, as its participants had to, among other things, elect a new leader. Eventually, they re-elected Front National's Bruno Gollnisch as President of the AENM.

The AENM published a press-release, which stated:

The members of the European Alliance of National Movements, which gathers political organizations from France, Italy, Slovenia, Hungary, Bulgaria, Lithuania, Spain, Portugal, Belgium (Wallonia and Flanders), hold their Congress in the presence of observers from Japan in Hédervár, Hungary.

What is interesting is that the press-release does not mention Ukraine or the All-Ukrainian Union "Freedom" (Svoboda), which was previously claimed to be a member of the AENM, in particular by the BNP. And here is a photo of the AENM's 2012 congress: 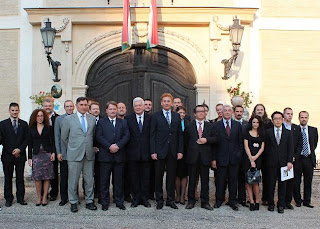 No member of Svoboda is featured on the photo.

Why has Svoboda not participated in the AENM's congress? The Ukrainian 2000 website cites Polish politician and political scientist Mateusz Piskorski, who says that Svoboda has been excluded from the AENM because of its overtly racist stances. Earlier today, however, Svoboda denied these allegations, with a reference to Bruno Gollnisch.

If Svoboda had not been excluded from the AENM, then why no representative of the party was present at the AENM's 2012 congress that was called to elect a new leader? Is it because Svoboda had been indeed excluded form the Alliance, or is it because Svoboda's "comrades" in the AENM just did not bother to know what this Ukrainian extreme right party had to say?
Автор: Anton Shekhovtsov на 21:57