While The Times declared Elizabeth II the 2012 Person of the Year and Time named the US President Barack Obama, one of the most popular Ukrainian magazines, Korrespondent, gave the same title to the leader of the notorious extreme right All-Ukrainian Union "Freedom" (Svoboda), Oleh Tyahnybok. 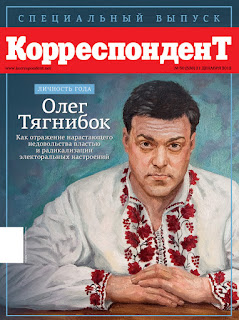 To justify his decision, which would have been considered disgraceful and disreputable for any liberal democratic publication, Korrespondent's chief editor, Vitaliy Sych, stated that it was Svoboda's successful performance at the recent parliamentary elections (10.44%) that made Tyahnybok the Person of the Year. Vitaliy Sych even went that far as to pose with - and, thus, advertise - Tyahnybok's portrait that Korrespondent was going to put up for auction. 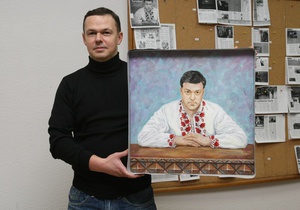 Korrespondent's move is also shamefully inconsistent given the fact that the magazine did not include Tyahnybok in its Top-10 of Ukrainians who influenced the course of events in Ukraine in 2012. This Top-10 features politicians, sportsmen and cultural figures who, according to Korrespondent, one way or another contributed to the development of Ukraine or the country's positive image abroad.

It now seems that Korrespondent decided to follow in the footsteps of those Ukrainian mass media, which deliberately, i.e. on the instruction of the ruling oligarchic Party of Regions, increased the extreme right's media visibility since 2010, to weaken the mainstream right, or - in terms of the Ukrainian political context - the national democrats. It was a number of influential Ukrainian mass media, especially the "Shuster Live" and "Big Politics" TV shows, that have been bluntly promoting Svoboda as a respectable political force. In his book on the relationship between the extreme right and mass media, Antonis A. Ellinas neatly described this relationship as follows:

Media exposure is a critical political resource for all political newcomers, but it is particularly important for the Far Right. Because its political opponents often associate the Far Right with the legacy of authoritarianism, media exposure can be crucial for validating its political presence. Lacking such exposure, Far Right parties might be doomed to political irrelevance and relegated to the margins of the political discourse. But once the media start publicizing their views, Far Rightists gain respectability. A quote in a newspaper report or a spot on a television panel signals to media audiences the political significance of the Far Right, turning it from a marginal to a mainstream political player. Persistent presence in media spotlights helps lift the stigma that Far Right parties might carry and grants them authority as legitimate actors in the political game.

Korrespondent's decision to name right-wing extremist Oleh Tyahnybok "the Person of the Year" followed the attacks on peaceful gay demonstration and human rights activists carried out by Svoboda's thugs and the European Parliament resolution on the situation in Ukraine that declared its concern "about the rising nationalistic sentiment in Ukraine, expressed in support for the Svoboda Party", recalled "that racist, anti-Semitic and xenophobic views go against the EU's fundamental values and principles" and appealed "to pro-democratic parties in the Verkhovna Rada not to associate with, endorse or form coalitions with this [Svoboda] party".

Of course, the European Parliament is no authority for Korrespondent and its chief editor Vitaliy Sych, yet since the magazine pledges its loyalty (or just pays lip service?) to democratic values, it must be reminded what democracy and liberalism truly are.
Автор: Anton Shekhovtsov на 16:28