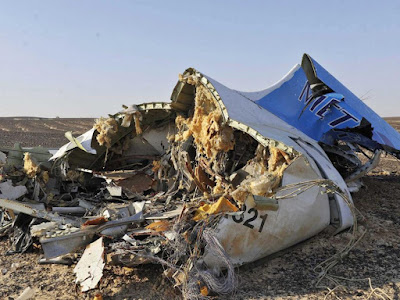 Essentially, there have been two options:

1. A mechanical failure. The Russian media reported that Flight 9268 experienced technical problems and the pilot asked for a landing in a nearest airport. The Russian media also quoted various people in Russia - family members of the crew, technicians, and other third parties - saying that, in the past, there had been oral reports of the technical problems that the pilots and crew had with the aircraft. Explaining the crash of Flight 9268 with a reference to the mechanical failure was apparently the safest option for Moscow. Since Russia is engaged in the erratic campaign of saving the regime of Bashar al-Assad in Syria by bombing civilian population, anti-Assad rebels, and, occasionally, ISIS terrorists, the technical explanation presents a picture of a dramatic casualty in no way related to Putin's Syrian campaign. Naturally, this explanation also points to the corrupt practices in Russia (an aircraft experiencing technical problems should never have been used by the Kogalymavia airline), but all the Russians are aware of the devastating corruption in their country, so "it's fine".

2. A terrorist attack. Almost immediately after the crash, ISIS terrorists claimed responsibility for the incident. This directly linked the crash to Moscow's Syrian campaign, and implied that ordinary Russians paid a costly price for Putin's adventures. Hence, admitting that the terrorist attack was the cause of the crash of Flight 9268 could be a blow to Putin's image domestically: for the Russian audience, he presents the Syrian campaign as something distant and, at the same time, beneficial for Russia's international standing, but the terrorist attack brings the war back home. A similar situation in Spain (an al-Qaeda cell claimed responsibility for the 2004 Madrid train bombings) resulted in the withdrawal of the Spanish troops from Iraq. If Putin admits that an Egyptian cell of ISIS has been behind the crash and continues his Syrian campaign, his popularity in Russia my decrease. On the other hand, acknowledging the terrorist attack could still be useful for Moscow in terms of its international image: "the Russians are fighting the war on international terrorism, and Russia and the West are in this together, hence Russia is no longer a pariah state, so do lift the sanctions and accept us to the club of the global powers".

Nevertheless, Moscow sees the first option as the most useful. After all, even the prospect of Russia's heightened international standing can only be used by the Kremlin for the purposes of consolidating Putin's regime, but Moscow's cost-benefit analysis shows that the threats to Putin's domestic image in the case of accepting the second option are more significant than the potential benefits.

Moscow's current problem with the first option, however, is that British and US intelligence services increasingly point to the terrorist attack as the cause of the crash, thus narrowing Moscow's maneuvering space. And the recent reports in the Russian and international fringe media hint that Moscow may have come up with a third option.

On 6 November, Russia's international Sputnik website published Finian Cunningham's article that bluntly asked: "was it really terrorists, or was it British MI6 agents palming the deed off as terrorists?". The same day, a conspiracy website published an article by Sorcha Faal arguing that the Russian intelligence service had allegedly captured and arrested "two CIA assets for masterminding the Sinai plane crash of Flight 9268". The same argument was reproduced by Sean Adl-Tabatabai, a long time follower of David Icke who believes that a secret group of reptilian humanoids controls humanity. On 8 November, Russia's chief propagandist Dmitry Kiselev, published an article implicating that an explosion on Flight 9268 could be a result of the agreement between the "Western coalition" and ISIS.

This version may seem absurd to everyone who is not prone to conspiracy theories, but it is also extremely dangerous. It means that, indeed, the consolidation of Putin's criminal regime at home is far more important for the Kremlin than the international cooperation, and that Moscow is ready to escalate its war on the West. The Kremlin keeps on instilling anti-Western hatred into the Russian society by feeding it with conspiracy theories, and this hatred may lead to psychological acceptance of even more aggressive approach towards the West. As Voltaire wrote, "those who can make you believe absurdities, can make you commit atrocities".