State of EU-Russia relations: A brief analysis of the EP vote

On 10 June 2015, the European Parliament adopted a resolution "on the state of EU-Russia relations". It is a strong resolution that condemns the illegal annexation of Crimea and Russia's war against Ukraine, as well as reminding that Russia is "directly or indirectly, involved in a number of 'frozen conflicts' in its neighbourhood – in Transnistria, South Ossetia, Abkhasia and Nagorno Karabakh".

Importantly, the resolution states that "at this point Russia [...] can no longer be treated as, or considered, a ‘strategic partner’".

In the context of this blog, I am happy to say that the European Parliament raises concerns directly related to the themes regularly discussed here, namely the cooperation between Putin's Russia and the Western far right:


Is deeply concerned at the ever more intensive contacts and cooperation, tolerated by the Russian leadership, between European populist, fascist and extreme right-wing parties on the one hand and nationalist groups in Russia on the other; recognises that this represents a danger to democratic values and the rule of law in the EU; calls in this connection on the EU institutions and Member States to take action against this threat of an emerging ‘Nationalist International’;

Is deeply concerned with Russia´s support for and financing of radical and extremist parties in the EU Member States; considers a recent meeting in St Petersburg of the far right parties an insult to the memory of millions of Russians who sacrificed their lives to save the world from Nazism; 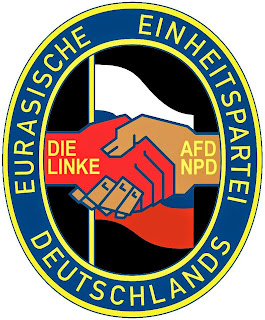 The vote, however, has brought some surprises too.

1. Belgian MEP Gerolf ANNEMANS from the far right Vlaams Belang abstained, although he used to vote against the resolutions critical of Russia's actions.

2. MEPs from the far right Sweden Democrats party, Peter LUNDGREN and Kristina WINBERG, abstained and, thus, rebelled against their Europe of Freedom and Direct Democracy Group that voted against the resolution.