What does the fascist conference in St. Petersburg tell us about contemporary Russia?

On the 9th of May, Russia will plunge into ritualised mass celebrations to commemorate the 70th anniversary of the victory over fascism in the “Great Patriotic War”. At the same time, on the 22nd of March, a few weeks before the celebrations, a Russian party with a presumably patriotic name “Motherland” held the International Russian Conservative Forum (IRCF) that hosted over a dozen of notorious European and American fascists, white supremacists and anti-Semites.

To add injury to the apparent insult, the Motherland party held the IRCF in St. Petersburg that suffered, in 1941-1944, one of the longest sieges in the military history (Siege of Leningrad) that resulted in over a million casualties of civilians alone.

Is this (yet another) case of Russia’s ideological schizophrenia or something else?

“The fringe of the fringe”

When the international participants of the IRCF gathered in the Holiday Inn hotel, they were greeted by their Russian counterparts from various right-wing extremist groups, none of which, except for the Motherland party, has any political significance in Russia. The international guests matched them well. As one of the speakers, founder and editor of the racist American Renaissance website Jared Taylor, admitted himself, that was “a bizarre lineup”, “the fringe of the fringe”.

And, indeed, they were.

The bulk of the international part of the IRCF was represented by the Alliance for Peace and Freedom (APF), an umbrella movement that was established in Brussels in the building of the European Parliament in February 2015 and united fascist and neo-Nazi parties and smaller organisations from Italy (New Force), Germany (National Democratic Party of Germany), Sweden (Party of the Swedes), Greece (Golden Dawn), Spain (National Democracy), Belgium (Nation), and Denmark (Danish Party).

The chairman of the APF, Roberto Fiore, has almost forty years of experience of far right activism; he was briefly a MEP in 2008-2009, but in the most recent general election in Italy his party New Force obtained only 0.26% of the vote. The notorious Golden Dawn, which the Greek court may soon officially recognise as a criminal organisation, is arguably the most successful party in the APF, yet still it has limited impact on the Greek politics. The Belgian Kris Roman, whom the organisers proudly described as “chairman of the research centre ‘Euro-Russia’” is most likely the only member of this “research centre”. Nick Griffin, former leader of the British National Party who was expelled from this party in autumn 2014, represented the British Unity, a virtual party that largely exists on Facebook with four thousand “likes”.

The presentations of the participants of the IRCF were expectedly full of ridiculous conspiracy theories, racist rants, anti-gay drivels, illiberal ravings, and subservient praise of Putin’s Russia and the man himself. Some of the international participants obviously wanted to demonstrate their unshakeable loyalty to Putin’s regime and – who knows! – may be get some Russian money, following the success of the French National Front that secured a multi-million loan from a Russian bank in 2014.

Fat chance. Despite the widespread and sometimes justified assumptions that Putin’s Russia provides financial assistance to European far right parties, it does not throw money to anyone who supports the Russian foreign policy. The Kremlin favours those who have solid support in their respective societies. Like the French National Front that has won the second place in the recent regional elections.

The fringe nature of the event was defined not only by the credentials of the participants who were actually there, but also by those who were invited but refused to come or cancelled their participation.

The IRCF has almost a year-long history. Originally, the Motherland party invited all the “fifty shades of brown”: in addition to those who were present in St. Petersburg, the organisers invited comparatively more moderate far right parties such as the French National Front, Freedom Party of Austria, Hungarian Jobbik, Serbian Radical Party, and some others. They all refused, at different stages of the process, to come because they did not want to fraternise with blatant fascists and racists, as they feared that their participation might damage their image at home. The names of representatives of the Bulgarian Attack party and Italian Northern League that for some time cooperated with former Prime Minister Silvio Berlusconi were still on the conference programme on the day of the event, but Attack’s Volen Siderov cancelled his visit in the nick of time, while Northern League’s Luca Bertoni left the forum – perhaps even appalled! – before his own presentation.

This is the first thing that we have learnt from the fascist event in St. Petersburg. Facing the political and economic backlash from the West for Russia’s military aggression in Ukraine, the Russian elites are desperate for any, even marginal, European and US support of the Kremlin’s policies. However, some of the Russian political elites reveal blatant ignorance of the differences between various forces even if they are evidently coming from one and the same broad far right political camp. These differences are too evident and appear to be the main reason why no far right group exists in the European Parliament despite the fact that there is a sufficient number of far right and Eurosceptic MEPs to form such a group.

Yet there are more important things than the Russian elites’ lack of expertise on their potential allies that we can learn from the event in St. Petersburg.

In the large segment of the Russian public sphere, the meaning of the term “fascism” excessively used by the Kremlin and the Russian state-controlled mass media differs dramatically from its commonly accepted meaning in the West.

Many people in Russia have increasingly adopted the Soviet logic of the use of this term. For them, the meaning of “fascism” is defined by the same reason why Russia celebrates the victory in the so-called Great Patriotic War (1941-1945), rather than the Victory in Europe Day that commemorates the Second World War (1939-1945). Following the agreements made in the secret protocol complementing the 1939 Nazi-Soviet non-aggression pact that implied the division of Poland, Romania, the Baltic States and Finland into the Nazi and Soviet “spheres of influence”, the Third Reich and the Soviet Union started the Second World War by invading Poland in September 1939. For the Soviet Union, this was not the beginning of the war – it only started when the Third Reich attacked the USSR in 1941. This is exactly when German fascism became a real danger to the Soviet Union, and it was the “Great Patriotic War” that provided a particular emotional interpretation of fascism as a first and foremost anti-communist or anti-Soviet ideology.


For many Russians, today’s meaning of “fascism” is similar: “fascists” are those who are perceived as enemies of Russia or as undermining the Russian sphere of influence. This is exactly why Moldovan troops were called “fascists” in 1992 when they tried, unsuccessfully, to regain control over Transnistria occupied by the Russian army. Some Russians applied the same term to former Georgian pro-Western president Mikheil Saakashvili, and, of course, the government in post-revolutionary Ukraine was named “Kyiv fascist junta” because it wanted to move Ukraine away from the Russian sphere of influence.

If the use of “fascism” is determined by the attitudes towards Russia and its geopolitical standing, so is the use of the term “anti-fascism”. “Anti-fascists” are all those who support Putin’s Russia or back up its geopolitical interests. A tweet posted (but later deleted) in the course of the event in St. Petersburg by Aleksey Zhuravlev, the leader of the Motherland party, is telling in this regard. He posted a photo of Udo Voigt, a high-ranking member of the National-Democratic Party of Germany, the largest neo-Nazi organisation in post-war Europe, and commented: “MEP Udo Voigt is an antifascist too!”. It is Voigt’s positive attitudes towards the Kremlin that make him an “anti-fascist” in Russia. 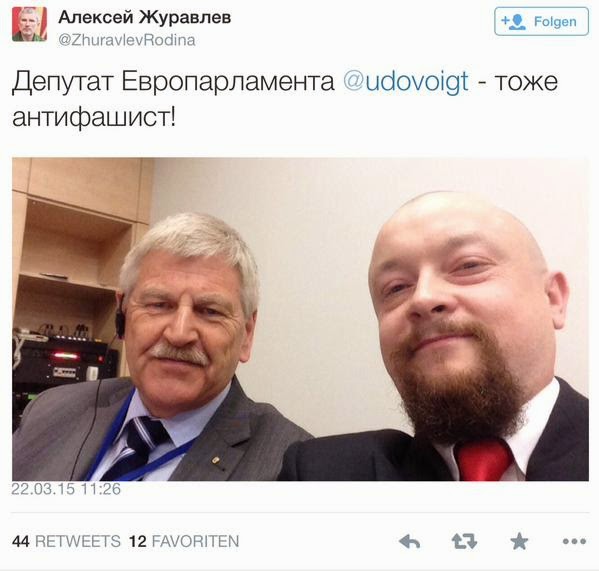 Confused elements of the left-wing movement in the West take well the use of the term “anti-fascism” by the Kremlin and the Russian state-controlled mass media. However, the Kremlin and its supporters cannot constantly call ultranationalists and anti-Semites “anti-fascists”.

The widespread word to describe right-wing extremists in the Russian context is “conservatives”. When the Motherland party first planned to hold the IRCF in March 2014, it was called the “Russian National Forum against Tolerance”. They later dropped the last part and kept only “Russian National Forum”. With the rise of Moscow’s media narrative about Ukrainian nationalism and Russia as a bastion of family and conservative values, the “National” in the name of the forum was replaced by “Conservative”. The dangerously multifaceted meaning of “conservatism” in Russia is also reflected, in particular, by Vkontakte, the most popular social networking website in Russia. In the “political views” drop-down menu, one cannot find “far right” or “fascist”, so people who actually hold these views select the “ultraconservative” option.

The fascist event in St. Petersburg that has taken place only a few weeks away from the celebrations of the “anti-fascist” victory in the “Great Patriotic War” should not be dismissed as a case of ideological schizophrenia on the part of the Russian elites. Neither should it be – in a sensational manner – allotted with any great political significance: the forces represented in St. Petersburg are, indeed, the fringe of the fringe of miniscule importance in their respective societies, and the Kremlin is unlikely to fund them. However, the event and the history behind it provide important insights into how the Kremlin and the Russian state-controlled mass media wage their information war and what role particular linguistic forms play in this war.