The Quest for an Ideal Youth in Putin’s Russia

My review of two books on the Kremlin-inspired youth movement called Nashi published in Slavonica, Vol. 19 No. 2, October 2013: 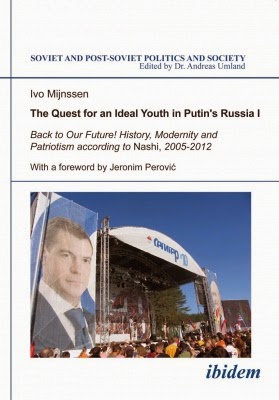 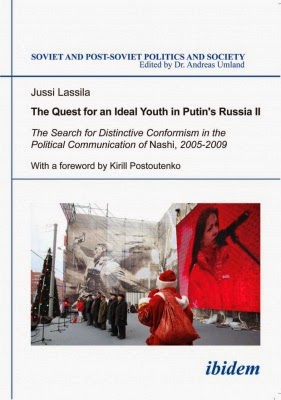 The Quest for an Ideal Youth in Putin’s Russia. Vol. 2. The Search for Distinctive Conformism in the Political Communication of Nashi, 2005-2009. By JUSSI LASSILA. Pp. 236. Stuttgart: ibidem-Verlag. 2012. €34.90. ISBN 978 3 8382 0415
The two monographs reviewed here deal with the very interesting socio-political phenomenon of the Kremlin-inspired youth movement called Nashi (Ours). Nashi were founded at the beginning of 2005 on the basis of another youth movement called Idushchie vmeste (Walking together), led by Vasilii Iakemenko, who subsequently also became the leader of Nashi. Idushchie vmeste came into prominence in 2002 when its members collected and burnt tens of copies of the allegedly ‘low-grade’ and ‘pernicious’ books of some Russian and foreign avant-garde authors, including Vladimir Sorokin and Viktor Pelevin. This, as well as the movement’s strong commitment to President Vladimir Putin, earned them the humiliating title ‘Putinjugend’, alluding to the Nazi paramilitary youth organization Hitlerjugend (Hitler’s youth). By 2004, however, Idushchie vmeste fell into decline.

The movement was then revived in the form of Nashi thanks to the political developments in neighbouring Ukraine. After the 2004 Ukrainian presidential elections, hundreds of thousands of Ukrainian citizens went out into the streets to protest against electoral fraud, unleashing what became known as the Orange Revolution. The protestors eventually forced the Ukrainian authorities to call a re-election, which resulted in the defeat of the pro-Russian candidate. By the beginning of 2005, the Russian establishment became afraid of similar developments occurring in Russia too. The significant contribution of young, active Ukrainians to the success of the Orange Revolution prompted the Russian establishment to launch a pre-emptive defence force by reviving, mobilizing and consolidating a pro-government youth movement. The authors of both volumes reviewed here provide a detailed history and context of the establishment of Nashi, while Lassila also discusses its predecessor, Idushchie vmeste. According to Mijnssen, Nashi managed to mobilize a large number of young Russians through a mixture of emotional appeal, skilful use of symbolic politics, as well as the promise of professional self-realization. For Lassila, the movement represents the making of an ‘ideal youth’ within the framework of official national identity politics under Putin.

One of the mobilizing techniques of Nashi was its reference to the USSR’s ‘Great Patriotic War’. Indeed, the organization’s full official name was the Democratic Anti-fascist Youth Movement. Mijnssen argues that the Soviet Union’s struggle against Nazi Germany served as a discursive template for the current situation in Putin’s Russia. Nashi attached the term ‘fascism’ to all those it perceived as its enemies, but, first and foremost, to the alleged enemies of Russia, Putin and his ‘consolidation project’. As presented in one of Mijnssen’s case studies, the interplay between politics, history and Russian symbolic interests in the Baltic states is best seen in the movement’s involvement in the controversy around the relocation of the Soviet War Memorial (the ‘Bronze Soldier’) in Tallinn, the capital of Estonia. Many ethnic Estonians consider the memorial a symbol of the Soviet occupation of their country; for the Estonian Russian-speaking community, by contrast, the ‘Bronze Soldier’ symbolized Soviet victory over the Nazis, as well as their links to Russia, and their claims to equal rights that they presumably did not enjoy in Estonia. In the discourse of Nashi, the Estonian authorities became ‘fascists’, and, as Mijnssen shows, the movement ‘turned the protests against the movement’s removal and the defense of the official war narrative into an issue concerning Russia’s national honour’ (p. 105).

Another one of Mijnssen’s case studies focuses on the International Youth Forum, organized by the Russian government and Nashi in the summer of 2010 at Lake Seliger. The aim of this event was to imbue Russian youth with patriotic values, to train them to fight the (largely illusive) threat of a Russian ‘Orange Revolution’, while at the same time convincing international participants of the sincerity of Russia’s aspirations to become a modern democratic state. The author provides the background to the establishment of the Seliger camp, and, based on his participant observation, describes the daily life of the camp — the assemblies, lectures, sharing sessions, leisure activities and songs (all permeated with populist Russian patriotism), highlighting also various problems encountered by the participants. He notes that Nashi tried to broaden the camp’s appeal ‘beyond the political, activist youth and to encompass a broader Russian and international youth’ (p. 167). The Seliger camp was envisaged as a prestige project that had to contribute to ‘the political legitimacy of the Russian “tandem” regime’ (p. 167). However, according to Mijnssen, the Forum failed in both its open and its hidden agendas: neither did Nashi realize their declared goal of building ‘a personal across-the-globe network of like-minded individuals’ (p. 169), nor were they particularly successful in conveying their political message to Russia’s youth more generally. Mijnssen’s overall conclusion is that the movement’s long-term impact remains limited, first and foremost because of its own internal contradictions. As a youth organization, it may have provided its activists ‘with educational and financial opportunities’, but, ultimately, its ‘promise of upward social mobility and less government corruption remained mostly unattainable’ (p. 177).

The failure of Nashi is also the focus of Lassila’s study, the main concern of which is to show how this movement ‘can be approached in relation to its role in constructing a new ideal youth in Russia with the presence of particular social and political constraints’ (p. 197). Using discourse analysis and relying on Pierre Bourdieu’s views of cultural production, this book identifies those socio-political factors that created obstacles to the communication strategies of Nashi. Lassila analyses the principal online writings of Nashi — in particular, their manifesto. His aim is to investigate the constant tension between didactics and stimulation within the movement’s recruitment strategies, with particular focus on its image-fashioning. Lassila also studies interviews with Nashi activists, both those that he conducted himself and those available online. He is equally interested in the movement’s political rituals. One of his case studies is the bicycle marathon action dubbed ‘The Road of Freedom-2007’, which Nashi launched to celebrate the obscure 395th anniversary of the first Russian popular uprising against Polish-Lithuanian forces in seventeenth century Muscovy. According to Lassila, this ‘historical-patriotic’ marathon blurred particular ‘historical landmarks of national identity and youth activism sensed as modern’ (p. 27). In conclusion, Lassila argues that the political communication of Nashi followed ‘an explicit ritual-like strategy in combining official political discourse with youth culture and its partially counter-culture practices’ (p. 202). However, attempts to resolve the movement’s ambiguous positioning between ‘adult-driven conformism and youth-related counter-culture’ (p. 203) has resulted in failure.

The limitations and shortcomings of Nashi, revealed by Mijnssen and Lassila, have contributed to what seems to be the final decline of the movement in 2012 — the very year in which the monographs were published. A serious blow was delivered to Nashi’s reputation at the beginning of 2012, in the period between the parliamentary elections, which sparked mass protests in major Russian cities, and the presidential elections. Russian representatives of the international ‘hacktivist’ network called Anonymous hacked Nashi’s e-mails and published them online. The e-mails revealed that Nashi had paid money to a vast network of bloggers, journalists and even ‘internet trolls’ (individuals who intervene malevolently and provocatively in online activity) in order to create a favourable picture of Putin while discrediting the political opposition. Following this scandal, the movement has been unable to mobilize itself against the anti-Putin protesters gathering in the streets. Although the movement is still nominally in existence (along with its rarely updated web-site), further scandals, involving some of its high- ranking ‘commissars’, as well as some internal tensions of its own, has turned Nashi into a case in the history of Russia’s youth organizations, rather than its future. Both monographs are significant studies that unpick this very interesting phenomenon of contemporary Russia, providing important insights into the political instrumentalization of youth under the country’s authoritarian regime.
Автор: Anton Shekhovtsov на 17:19