I hate that Von Thronstahl released their new album Germanium Metallicum after I had written my article on apoliteic music! 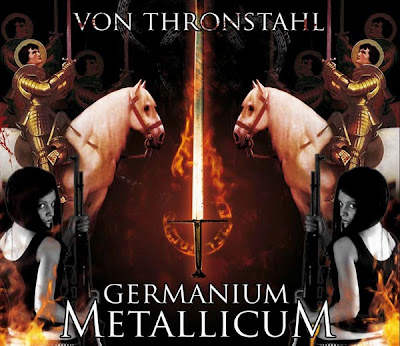 This album is the result of a collaboration between young artists from seven countries - united in their creative will, and conspired by their apprehension for their Europe, which should be both a home and a fortress for their culture and their children.
Protecting their holy values, a young generation of Europeans are about to strengthen the resistance against all forms of imminence: both from the outside and from the inside. And, if necessary, even against their own governments, for now they betray the essential interests of their people.
Pure and noble are the hearts of young idealists, pure and noble is the element of Germanium Metallicum. The homeopathic effects of this Germanium Metallicum is also helping to vitalise the power of resistance and it makes contact with the inner will and determination. So this is a worthy symbol for an alchemic transformation; physically and spiritually.

(Small wonder that a Russian New Right groupuscule "Peoples' Rights" has published a lengthy review of Germanium Metallicum on their web-site.)

Being in a minority, even a minority of one, did not make you mad. There was truth and there was untruth, and if you clung to the truth even against the whole world, you were not mad.
(George Orwell, 1984).

What would have Orwell said....
Автор: Anton Shekhovtsov на 22:32