Protests against the visit of Oleh Tyahnybok

On 6 January 2010, approximately a thousand (some say 1.500) of citizens of Sevastopol protested against the visit of notorious radical right-winger Oleh Tyahnybok, a leader of the All-Ukrainian Union "Freedom" and a 2010 presidential candidate - 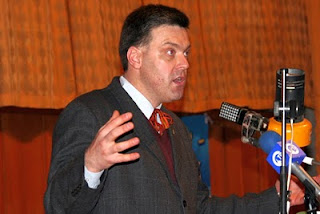 The protests were organised by various groups and parties, ranging from internationalist anti-fascists and Marxists to radical Russian nationalists and Ukrainian populists (the Party of Regions). Anti-fascists and Marxists chanted slogans like "Fascism shall not pass" and "Ouf fatherland is the whole world", while Russian nationalists shouted "Russia, Russia". The Party of Regions, which backs the currently most popular presidential candidate Viktor Yanukovych, did nothing at all, and I assume most of the people who held blue banners of the party were paid for participating in the protests. But well, at least they showed up. It is a shame that local activists of the Bloc of Yuliya Tymoshenko, another popular presidential candidate, did not support the protests against Tyahnybok.

I've shot some video with my camera -

Protests against the visit of Oleh Tyahnybok in Sevastopol from svonz on Vimeo.

The visit of Tyahnybok was claimed to be a meeting with citizens of Sevastopol, but very little people were actually allowed to meet him in the Sevastopol Cultural and Business Centre. Police let through only the local supporters of his party (mostly football hooligans and Neo-Nazi skinheads) and certain journalists. His younger supporters preferred to hide their faces - 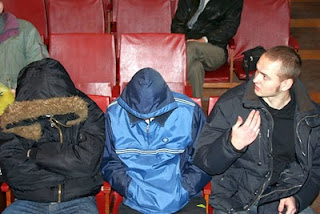 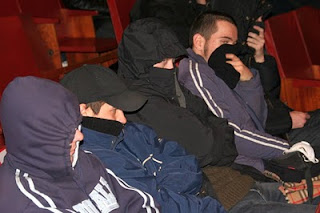 Tyahnybok's Sevastopol visit actually followed an earlier "March Against Illegal Immigration" organised by his "Freedom" party and held on 26 December 2009 in Sevastopol. Here's the video - the "March" was picketed by counter-demonstrators and there were a couple of skirmishes. Note the Nazi salutes given by the activists of the "Freedom" party, under blue banners. Well, I am not surpirsed actually as the local leader of the party Oleksandr Boltyan likes posing in a Nazi helmet - 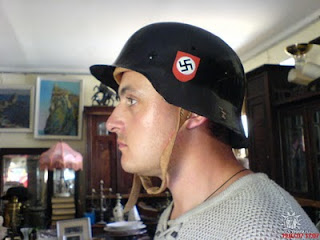 Fascism, however, shall indeed not pass.
Автор: Anton Shekhovtsov на 18:14