Writing in 2011, a year ahead of the parliamentary elections in Ukraine, I stated in one academic paper that the entrance of the far right Svoboda party to the Ukrainian parliament in 2012 would “spark negative feelings on the part of the Russian minority and contribute to the activization of pro-Russian nationalist movements that could garner support from Russia and advance separatist activities in the largely Russian-speaking regions, such as the Crimea”. Although my prediction seems to have turned out to be right, I missed an important point which lies outside conventional political science: it was not Svoboda’s electoral success in 2012 per se that later energized the pro-Russian nationalists, but rather the portrayal and representation of the Ukrainian far right in general and Svoboda in particular in the Russian media engaged in the extensive information war against Ukraine.
As a number of Ukrainian academics argued in the open letter to the leaders of Ukraine’s democratic opposition calling to them to distance from Svoboda in the run-up to the 2012 parliamentary elections, if Svoboda did not exist, the (pro-)Russian political forces would have to invent it. Indeed, the real threat of Svoboda has never been its potential seizure of power in Ukraine. The main danger of the Ukrainian far right parties and movements has always lied in the possibility of their instrumentalization by higher political elites.

Rather than being genuine subjects of the political process, the Ukrainian far right has largely been fake actors in the Ukrainian political life, at least on the national level. Various far right forces have often been pulled out of the political fringes by more powerful political actors to be exploited in different political games. Far right parties and individuals were used by the authoritarian regimes of Leonid Kuchma and Viktor Yanukovych for disrupting social protests, rigging the vote or posing as “scarecrows” or “bigger evil” to mobilize popular support for the authoritarian regimes presented as “lesser evil”.

The rise of Svoboda, which resulted in its electoral success in 2012, began in 2009 when Svoboda won a landslide victory in the early council elections in one the West Ukrainian Ternopil region. This victory was largely determined by the breakdown of the national-democratic “Orange” political camp and the fact that major national-democratic forces, such as the Bloc of Yuliya Tymoshenko and Arseniy Yatsenyuk’s “Front for Change”, abstained from campaigning.

Svoboda’s victory over the National-Democrats in the Ternopil region did not go unnoticed to Yanukovych and his Party of Regions (PoR) who decided to exploit Svoboda in the fight against their main contenders, especially Tymoshenko. When, in 2010, Yanukovych was elected president of Ukraine and Mykola Azarov of the PoR was appointed Prime Minister, the media visibility of Svoboda dramatically increased, especially on TV-channels either directly or indirectly controlled by the new government. Not being represented, at that time, in the Ukrainian parliament, Svoboda’s top officials enjoyed media spotlight which other extra-parliamentary parties only dreamed of. Just like French Socialist president François Mitterrand who attempted, in the early 1980s, to weaken his mainstream right-wing rivals by instructing the state television to grant more media visibility to fringe parties such as the far right National Front, Yanukovych and his associates wanted to damage the mainstream opposition by elevating the significance of Svoboda.

However, Yanukovych’s regime – by instrumentalizing Svoboda – did not only aim at damaging the opposition, but also at securing the re-election of Yanukovych in the 2015 presidential election. Since 2010, it was increasingly clear that Yanukovych and his associates were trying to promote Svoboda’s leader Oleh Tyahnybok in order to have him as Yanukovych’s contender in the second round of the presidential election. Until the Euromaidan protests, of all the more or less popular opponents of Yanukovych’s regime, Tyahnybok was the only one who, according to the public opinion polls, would be crushed by Yanukovych in the second round.

Apart from other evidence, two top members of the PoR virtually confirmed the existence of the “Tyahnybok-in-the-second-round” scenario. At the end of 2010, when asked if he preferred Tyahnybok to Tymoshenko as an opposition force, then first deputy chairman of the PoR Volodymyr Rybak replied that Tyahnybok was “a model nationalist who worried about Ukraine” thus indirectly giving preference to Tyahnybok. More explicitly, in February 2013, then first deputy head of the PoR’s parliamentary faction Mykhaylo Chechetov declared that Yanukovych would win the 2015 presidential election and that “Tyahnybok would be his contender. We know about this”. 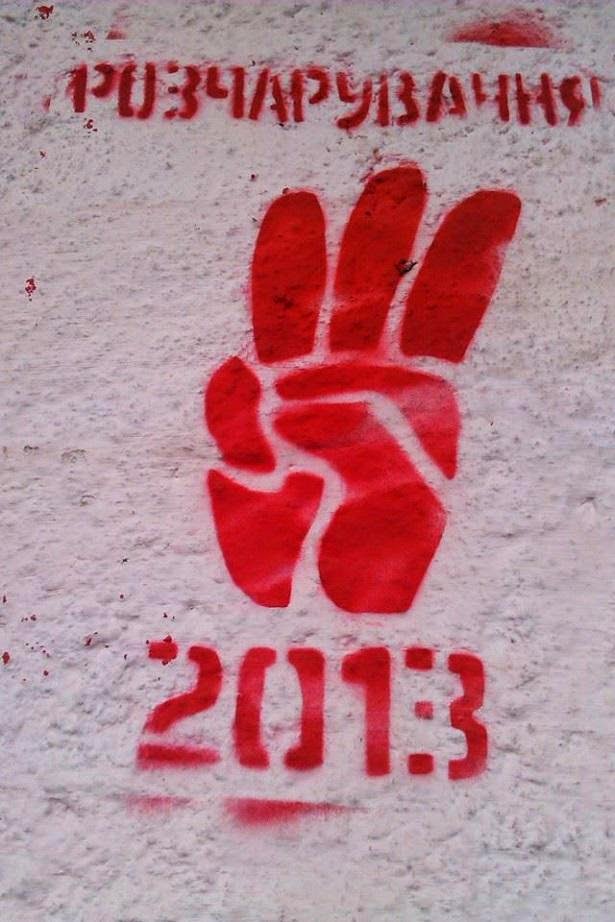 Tymoshenko, whose popularity declined in 2010, but who still enjoyed wide popular support, was almost the only hindrance to the above-mentioned scenario, so Yanukovych’s regime opened a criminal case against Tymoshenko and eventually jailed her in 2011. With the political rise of Vitali Klitschko, he became yet another hindrance to Yanukovych’s scheme, but, through a dodgy change in the Ukrainian law in 2013, the regime barred Klitschko from participating in the presidential election.

At the 2012 parliamentary elections Svoboda benefited from its inflated image of the most radical opposition to Yanukovych’s regime, as well as from the fact that the regime itself promoted this image through the controlled mass media. Since Svoboda failed to live up to this image in the parliament and elsewhere, it started losing popular support already in 2013.

Today, with Yanukovych ousted by the Euromaidan movement, Svoboda has not only lost the major source of negative mobilization, but also the covert patronage of the regime removed from power. This is corroborated by the results of the public opinion poll conducted by the Kyiv International Institute of Sociology in mid-March 2014: only 2.5% of the potential voters would support Tyahnybok in the early presidential election, while Svoboda would be supported by 5.2% of the voters in the early parliamentary elections – almost twice as little as compared to the party’s results in 2012. It seems viable to cautiously suggest that, unless Svoboda’s leadership offers an extraordinary contribution to Ukraine’s defense against the Russian aggression, the Ukrainian far right will eventually return to the extra-parliamentary fringes of the country’s political life.