It seems viable to suggest that the failure of Oleh Tyahnybok and Dmytro Yarosh in the presidential election has been determined by a combination of the following factors:

1. The popular vote in the presidential election has been largely tactical. Since March 2014, public opinion polls showed that Poroshenko appeared the most popular democratic presidential candidate, and this even led to the decision of Vitali Klitschko, another popular democratic candidate, not to stand for the election and, instead, support Poroshenko. In April 2014, the idea of electing a new president already in the first round of the election became increasingly pervasive, especially against the background of the separatist activities in Eastern Ukraine and the ongoing aggression of the Russian Federation. Many Ukrainians felt that “doing away” with the presidential election as quickly as possible in order to focus on the anti-terrorist and anti-separatist activities in the East would be good for the country, so they voted for Poroshenko as the most popular candidate. These included adherents of the far right. For example, in Kyiv, where the presidential election took place simultaneously with the mayor election and election to the Kyiv Council (city parliament), some adherents of Svoboda preferred to support Poroshenko for president and Klitschko for mayor of Kyiv, yet they still supported Svoboda for the Kyiv Council. In Kyiv, only 1.21% of the voters supported Tyahnybok for president, around 2.51% of the voters supported Svoboda's MP Andriy Illenko for mayor of Kyiv, but around 6.46% of the voters did give preference to Svoboda for the Kyiv Council.

2. With the ouster of Yanukovych, the far right organisations have lost the major source of negative voter mobilisation. Svoboda’s success at the 2012 parliamentary elections was partially determined by its image of the most radical opposition to Yanukovych’s regime (the image promoted by the regime itself), so Svoboda (and the Right Sector too) could be considered an “anti-Yanukovych party”. Without Yanukovych, its raison d’etre became – at least in the eyes of the voters – debatable. Moreover, if before the revolution Svoboda could position itself as allegedly the only patriotic party, then during the revolution and, even more so, after the Russian invasion and annexation of the Autonomous Republic of Crimea, all popular democratic parties became patriotic, so Svoboda lost its “monopoly” on patriotism. In the condition where Ukrainian patriotism became a natural, almost instinctive emotion, the far right failed to capitalise on the Russian invasion and aggression in Eastern Ukraine.

3. The far right, as a populist, anti-system force, may benefit from their opposition to the political elites, but post-revolutionary Ukraine, to a certain degree, still lacks its full-fledged political establishment to oppose to. Moreover, even if anti-establishment sentiments were relevant in the run-up to the presidential election, Tyahnybok and Yarosh seem to have yielded the palm of the anti-establishment thrust to Oleh Lyashko, leader of the Radical Party, who obtained 8.32% of the vote. Furthermore, unlike Tyahnybok or Yarosh, Lyashko ran an aggressive (and rather expensive) campaign, while allegedly personally taking part in the anti-terrorist operation in Eastern Ukraine. Tyahnybok's campaign was anything but active, while Yarosh officially stopped his campaign on 23 April and went to Dnipropetrovsk, presumably to focus on the formation of the anti-terrorist Donbass special battalion. However, since Yarosh stopped his campaign, he - in contrast to Lyashko - did not brag about his real or virtual military successes.


Hence, while not a far right politician himself, Lyashko has managed to lay claim to almost all anti-establishment sentiments in the Ukrainian society (i.e. critical of acting president Oleksandr Turchynov and the interim government).

Obviously, the failure of the far right in the presidential election contributes to the marginalisation of Svoboda and the Right Sector, but this failure does not imply that far right politics has no future in Ukraine. Let us consider the following points:

1. Tyahnybok was the only relevant far right candidate in the 2010 presidential election, and he obtained 1.43% of the vote. The insignificance of this result did not prevent Svoboda from winning 10.44% in the 2012 parliamentary elections. The combined vote for the far right in 2014 (Tyahnybok + Yarosh) is 1.86%, which is more than in 2010 (yet still far from significance). Naturally, the political situation in 2014 is different from the previous years, but considering Svoboda's results in the Kyiv Council elections (6.46%), the party still stands a chance of entering the national parliament after the early parliamentary elections.

2. Oleh Lyashko is "bad news". He can be compared to late Polish politician Andrzej Lepper, leader of the Samooborona (Self-Defence). Lepper and his party combined agrarian left-wing populism with Polish nationalism; Lyashko's image is very similar. 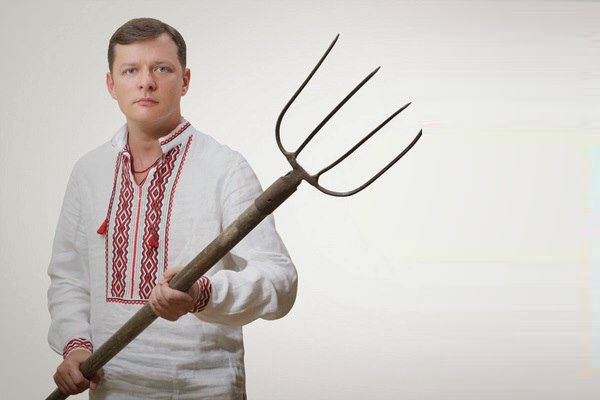 Moreover, both Lepper's and Lyashko's parties have featured right-wing extremists. Lyashko, for example, included - in the list of his Radical Party for the Kyiv Council elections - the most extreme elements of the Right Sector, namely leading members of the neo-Nazi "Patriot of Ukraine"/Social National Assembly.

4. The separatist activities in Eastern Ukraine and the ongoing Russian aggression against Ukraine may hold a key to the revival of far right politics (not necessarily in the form of Svoboda and the Right Sector), especially if mainstream democratic politicians – the political establishment in the making – fail to address the urgent problems of the country.
Автор: Anton Shekhovtsov на 13:50