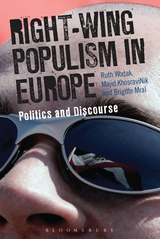 Right-wing populist movements and related political parties are gaining ground in many EU member states. This unique, interdisciplinary book provides an overall picture of the dynamics and development of these parties across Europe and beyond. Combining theory with in-depth case studies, it offers a comparative analysis of the policies and rhetoric of existing and emerging parties including the British BNP, the Hungarian Jobbik and the Danish Folkeparti.

This timely and socially relevant collection will be essential reading for scholars, students and practitioners wanting to understand the recent rise of populist right wing parties at local, countrywide and regional levels in Europe, and beyond.

Part II Case Studies - Western Europe
7. Ploughing the Same Furrow? Continuity and change on Britain's extreme-right fringe - John E. Richardson
8. Contemporary Forms of Racist Movements and Mobilisation in Britain - John Solomos
9. From Anti-Immigration and Nationalist Revisionism to Islamophobia: continuities and shifts in recent discourses and patterns of political communication of the Freedom Party of Austria (FPÖ) - Michal Krzyzanowski
10. Developments within the Radical Right in Germany: discourses, attitudes and actors - Britta Schellenberg.
11. Carlo Ruzza and Laura Balbo. Italian Populism and the Trajectories of Two Leaders: Silvio Berlusconi and Umberto Bossi - Carlo Ruzza and Laura Balbo
12. Explaining the Rise of the Front National to Electoral Prominence: multi-faceted or contradictory models? - Brigitte Beauzamy
13. Explaining the Swing to the Right: the Dutch debate on the rise of right-wing populism - Merijn Oudenampsen
14. The Stage as an Arena of Political Struggle. The struggle between Vlaams Blok/Belang and Flemish city theatres - Benjamin de Cleen

Part IV Case Studies - Scandinavian context
18. Populism - Changes Over Time and Space: a comparative and retrospective analysis of populist parties in the Nordic countries from 1965 to 2012 - Björn Fryklund
19. The Sweden Democrats came In From The Cold: how the debate about allowing the Sweden Democrats into media arenas shifted between 1998 and 2010 - Simon Oja and Brigitte Mral
20. Kristina Boréus. Nationalism and Discursive Discrimination against Immigrants in Austria, Denmark and Sweden - Kristina Boréus
21. Mediatization as an Echo-Chamber for Xenophobic Discourses in the Threat Society: the Muhammad cartoons in Denmark and Sweden - Stig A. Nohrstedt
22. Dealing with the Extreme Right - Christoph Andersson
Автор: Anton Shekhovtsov на 14:46