Italian Delegation to Russia-annexed Crimea in October 2016: Between Politics and Business

On 14-16 October 2016, an Italian delegation consisting of 18 politicians and businessmen visited Crimea illegally annexed by Russian from Ukraine in March 2016. The political part of the delegation was largely represented by regional politicians from far right parties such as the Northern League (Lega Nord) and Brothers of Italy (Fratelli d’Italia), but the delegation also featured one politician from the left-wing populist party Free Alternative (Alternativa Libera). The business part was represented by the leaders of the Italian companies Albrigi, Brescia Hydropower, Cantina di Soave, Scandiuzzi Steel Constructions, and Veronesi.

This trip was, to a certain extent, a follow-up of the Second Yalta International Economic Forum that took place in Crimea in April 2016. The forum was co-hosted by the EU-sanctioned “Prime Minister of the Republic of Crimea” Sergey Aksyonov and Andrey Nazarov, co-chair of the All-Russian Civic Organisation “Business Russia” (Delovaya Rossiya) which is a union of businessmen working in non-energy sectors of Russian economy. It was the “Business Russia” organisation that officially invited and paid for the trip of the Italian delegation, and Nazarov was their main host in Crimea in October.
For Russia, the conference in Yalta in April 2016 was important for two reasons. First, the sanctions introduced by the West against Russia effectively barred foreign companies from investing in businesses in Crimea to pressure Russia into returning the annexed republic to Ukraine. Second, by inviting European participants to the conference, Russia aimed to show that European businesses were interested in investing in Crimea and there were ways to pursue their interests. As could be expected, among the participants of the Second Yalta International Economic Forum one could see far right politicians coming from the Northern League, Freedom Party of Austria (Freiheitliche Partei Österreichs), Bulgarian “Attack” (Ataka), Alternative for Germany (Alternative für Deutschland), Polish “Change” (Zmiana), and the Japanese Issuikai organisation. At the conference, they unanimously condemned anti-Russian sanctions and, therefore, received extensive coverage in the Russian state-controlled media.

One of the leading Italian participants of both the Yalta conference and Crimean visit in October was Stefano Valdegamberi elected to the Veneto regional council on the personal list of the Northern League’s member Luca Zaia. In May 2016, Valdegamberi initiated a resolution calling on Rome to recognise Crimea as part of Russia and to lift anti-Russian sanctions. The resolution, which was not legally binding, was adopted by the Veneto regional council in May 2016, while similar resolutions were adopted during summer 2016 by the Lombardy and Liguria regional councils. Despite the efforts of Valdegamberi and his right-wing populist colleagues from other councils, none of these resolutions had any impact on the Italian authorities. 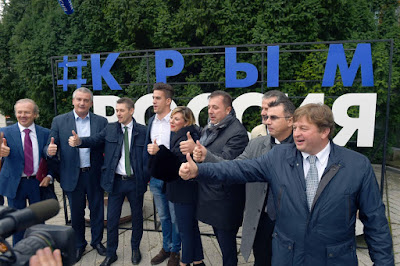 During his October visit to Crimea, Valdegamberi talked about the sanctions again, and even declared that Ukraine had to compensate for the “economic losses” of the Veneto region allegedly inflicted by the EU’s Crimea-related sanctions. It is interesting that several politicians from the Northern League, with which Valdegamberi is associated, have served as mouthpieces of Russian propaganda since 2014: Claudio D’Amico “monitored” the illegal referendum in Crimea; Gianluca Savoini, the spokesman for the Northern League’s leader Matteo Salvini, is president of the Lombardy-Russia Cultural Association, which functions as a Russian front organisation in Italy; Salvini himself appeared in the Russian State Duma in October 2014 wearing a sweatshirt saying “No sanctions against Russia”.

Like the conference in Yalta, the visit to Crimea in October had a clear propagandistic goal aimed at legitimising the Russian annexation of Crimea and showing that Crimea was not internationally isolated. To that end, Roberto Ciambetti, the Northern League’s member and president of the Veneto regional council, signed – together with the EU-sanctioned “Chairman of State Council of the Republic of Crimea” Vladimir Konstantinov – a joint statement on the development of interregional cooperation. A member of the Brothers of Italy and a member of the council of the city of Padua Marina Buffoni signed – together with Simferopol’s “mayor” Viktor Ageyev – an agreement proclaiming Padua and Simferopol twin-cities and announcing the intention to boost economic development and bilateral business contacts. Free Alternative’s member Tancredi Turco promised to continue his work aimed at persuading the Italian authorities to lift the anti-Russian sanctions. While he was sceptical over the efficiency of his efforts, Turco expressed his hope that the political situation in Italy might change in case Prime Minister Matteo Renzi, who supports the Ukraine-related anti-Russian sanctions, lost the constitutional referendum planned for 4 December 2016.

However, the economic aspects were perhaps the more important part of the visit to Crimea. Nazarov claimed that two contracts were to be signed during this visit. One contract apparently entails the construction of a 5-star hotel in Simferopol; the second one covers the joint purchase of a Russian magazine on architecture, construction and design by the “Business Russia” organisation and Italian businessmen. While it is not yet clear whether the contracts have indeed been signed or who exactly could have signed them from the Italian side, it is known that the participant of the delegation Fulvio Scandiuzzi is CEO of Scandiuzzi Steel Constructions, which is the only Italian company that had any relation to construction among those represented during the trip to Crimea.
Nazarov also announced the start of a joint production of a new wine brand that would be officially launched at the Third Yalta International Economic Forum planned for April 2017. He also claimed that there were offers to develop production of turkey meat. These plans clearly reflected the structure of the business part of the delegation: Cantina di Soave (represented by its president Attilio Carlesso) is a wine producing company, Albrigi (represented by its owner Stefano Albrigi) produces plants for processing and storage of liquid foods, and Veronesi (represented by its co-owner Marcello Veronesi and a senior manager Antonio Nicodemo) is engaged in farming.

The Western Crimea-related sanctions naturally remain a significant obstacle for foreign investments into the Crimean economy, and this was acknowledged by yet another participant of the delegation, director of the Chamber of Commerce of the Veneto region Gian Angelo Bellati. However, the Russians have long been discussing how Russian and non-Russian businesses could circumvent the sanctions, so it is important for relevant Western institutions to monitor closely the relations between European and Crimea-based businesses with regard to potential violation of the sanctions regime.

Members of the Italian delegation:

The Italian delegation was accompanied by Robert Stelzl, an Austrian and an employee of Ewald Stadler, the leader of the fringe right-wing populist Reformkonservativen party.