Svoboda never reported on its contacts with the neo-Nazi National Democratic Party of Germany in May 2013, as its leaders are aware of the damage that these contacts can do to the image of a "respectable" nationalist party.

Likewise, Svoboda has not reported on another meeting it had with European fascists on 13-14 September 2013. This time it was the Boreal Festival held in Cantù (Italy) and organised by Roberto Fiore's Forza Nuova. 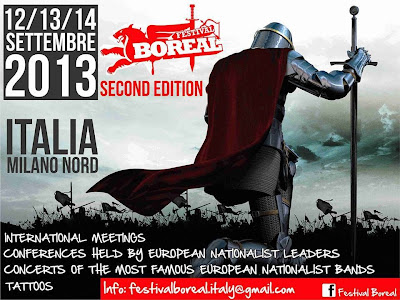 Apart from Svoboda, the following extreme right parties and movements have sent its representatives to the Boreal Festival:

Funnily enough, the idea behind the Hungarian Sixty-Four Counties Youth Movement is the re-establishment of Greater Hungary which includes parts of contemporary Ukraine. At the same time, both Polish movements consider the OUN and UPA, which Svoboda praises, criminal organisations that were involved in the anti-Polish genocide in Volhynia. 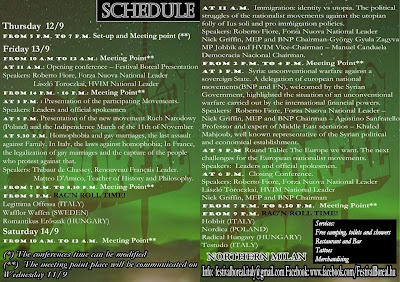 It is also interesting to note that representatives from Svoboda, Forza Nuova, National Democracy and the Party of Swedes took part in the “Vision Europa” conference on 23-24 March 2013 in Stockholm. So at least some of the core participants of the “Vision Europa” conference continue to strengthen the relations between the movements. Once again, the Boreal Festival may be another step towards building a new pan-European umbrella organisation for the extreme right. But how exactly is Svoboda going to reconcile with the Sixty-Four Counties Youth Movement, All-Polish Youth and National Movement?
Автор: Anton Shekhovtsov на 12:30