The “Russian World” will destroy Russia

It has been 14 years since Pyotr Shchedrovitsky wrote that “russkiy mir” (Russian world) could be a potent source of Russia’s modernization. For him, the existence of “russkiy mir” implied the availability of “Russian capital” defined as “an accumulation of cultural, intellectual, human and organizational potentials expressed in the linguistic thinking and communication (humanitarian) resources of the Russian language”. Using this Russian capital and mobilizing the Russian diaspora could be a foundation of the country’s innovation and neo-industrial development.

Yet even then, in 2000, Shchedrovitsky’s modernizing and relatively progressive interpretation of “russkiy mir” was a lone voice in the wilderness of ultranationalist, isolationist and expansionist narratives about “russkiy mir”. Already under President Boris Yeltsin, Russian and Russian-speaking minorities in former Soviet countries were used as tools of political influence and propaganda, but President Vladimir Putin effectively formalized “russkiy mir”, by the end of his second term, as one of the most important socio-political instruments of consolidation and cultural legitimization of his regime.

In foreign policy, this concept means two things. First of all, as a diaspora, “russkiy mir” is supposed to be an agent of Russian soft power in the West in general and Europe in particular. Second, as a geopolitical concept, “russkiy mir” refers to East European countries that Russia wants to keep in its orbit and where it can intervene in case they prefer a different foreign policy.

In domestic policy, this relational concept implies that Russia is a unique civilization in its own right, neither a part of the West nor East. Moreover, Russia, as epitomized by Putin, is not between the West and East; rather it is the West that is to the left of Russia, and it is the East that is to the right of Russia. The latter evaluation is obviously incorrect as Russia’s Cape Dezhnev is the easternmost part of Eurasia, but it is not the East that serves as a reference for “russkiy mir” but the West. Essentially, it is the rejection of the West as a civilizational model and Western values as guiding principles that defines “russkiy mir” in domestic policy.

Domestically, the Kremlin needs the concept of “russkiy mir” as a justification for its failure to deliver good governance despite the favourable economic conditions: the Russian state functions to the benefit of a narrow elite rather than in the service of the public good; the rule of law is weak and the checks and balances system is broken; the government is unaccountable and meaningful competition among political groups is non-existent; civil and political liberties are rapidly shrinking away. As the country has not progressed since then President Dmitry Medvedev wrote his wishfully optimistic article “Go Russia!”, Russia can still be described, in Medvedev’s terms, as a backward, primitive economy based on raw materials and endemic corruption, with a weak civil society overwhelmed by paternalistic attitudes and stupefied by low levels of self-organization.

While Medvedev’s article called for modernization of Russia along the Western lines, the concept of “russkiy mir” is intrinsically deemed to declare the current condition as a unique norm and justify Russia’s non-Westernness and non-modernization. It is fair to say, however, that the Kremlin invested heavily in modernization of two spheres: a propaganda machine (prestige projects and state-controlled media at home and abroad) and the country’s repressive apparatus (police and army). In other words, the Kremlin invested in the instruments that help retain power and control the population. 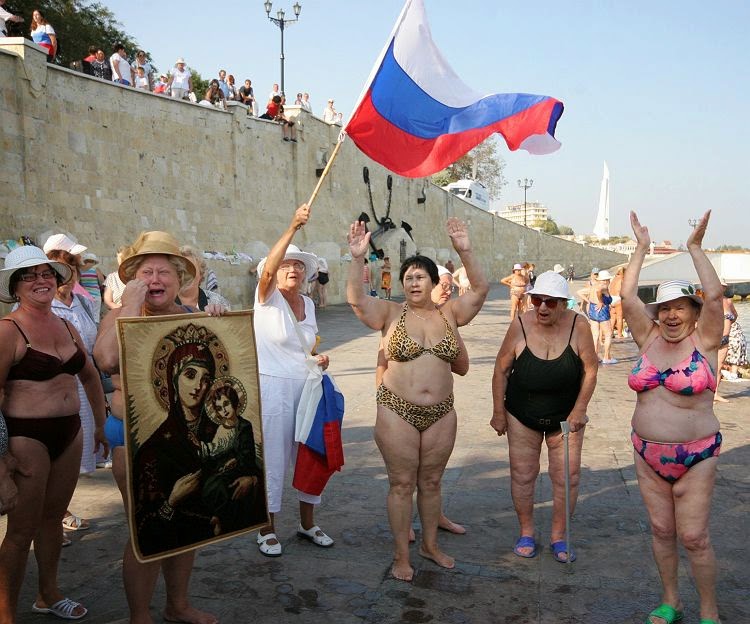 When Russian ultranationalists such as Aleksandr Dugin declare that Donbas is a forefront of “russkiy mir”, they are actually right. A patrimony of ousted President Viktor Yanukovych, Donbas suffered the most from his inefficient and corrupt rule, but many people living in Donbas have mastered the way of living in this condition and were afraid of any modernizing changes that the Euromaidan revolutionary movement vociferously demanded. The reason why the pro-Russian separatism was initially relatively successful in Donbas – leaving aside the actual Russian leadership in the separatist movement – and not in any other region of Ukraine is not the imaginary threat to the Russian language or any particular pro-Russian sentiment as such. It is the patriarchal, authoritarian culture that ascertained that people’s survival was only possible in a highly hierarchical structure. Many people in Donbas either got used to this structure or invested a lot of energy in learning how to survive or even succeed in it. Moreover, they held to this patriarchal framework as they did not know – or were never offered – any other approach to organizing their lives. In post-industrial societies these people would be called “losers of modernization”, but since genuine modernization is yet to start in Ukraine, they can be called “cravens of modernization”.

The Russians’ strong support for Ukrainian “cravens of modernization” can be explained not only as an unconscious strategy that defends Russia’s citizens from the realization of their country’s extreme wrongdoing in Ukraine, but also as a way of coping with loneliness in their “russkiy mir” and a wish to believe that “russkiy mir” is a viable and competitive civilizational project. Since Russian-speaking people of Ukrainian Donbas are theoretically considered, by the official foreign policy of Putin’s Russia, an integral part of “russkiy mir”, their acceptance of Western-style modernization would be perceived – especially if this modernization is successful – as an existential drama for the Russians.

However, the threat to the Russians’ self-esteem and to the status of Russia’s culture comes not from the Ukrainians (whether they are Russian speakers or otherwise) who have embraced the European integration project. Rather, it comes from the aggressive and corrupt “russkiy mir” that – in contrast to its alleged aim to promote Russian culture – actually damages Russia’s image in a wider world and has a stagnating effect on the Russians’ socio-cultural development. 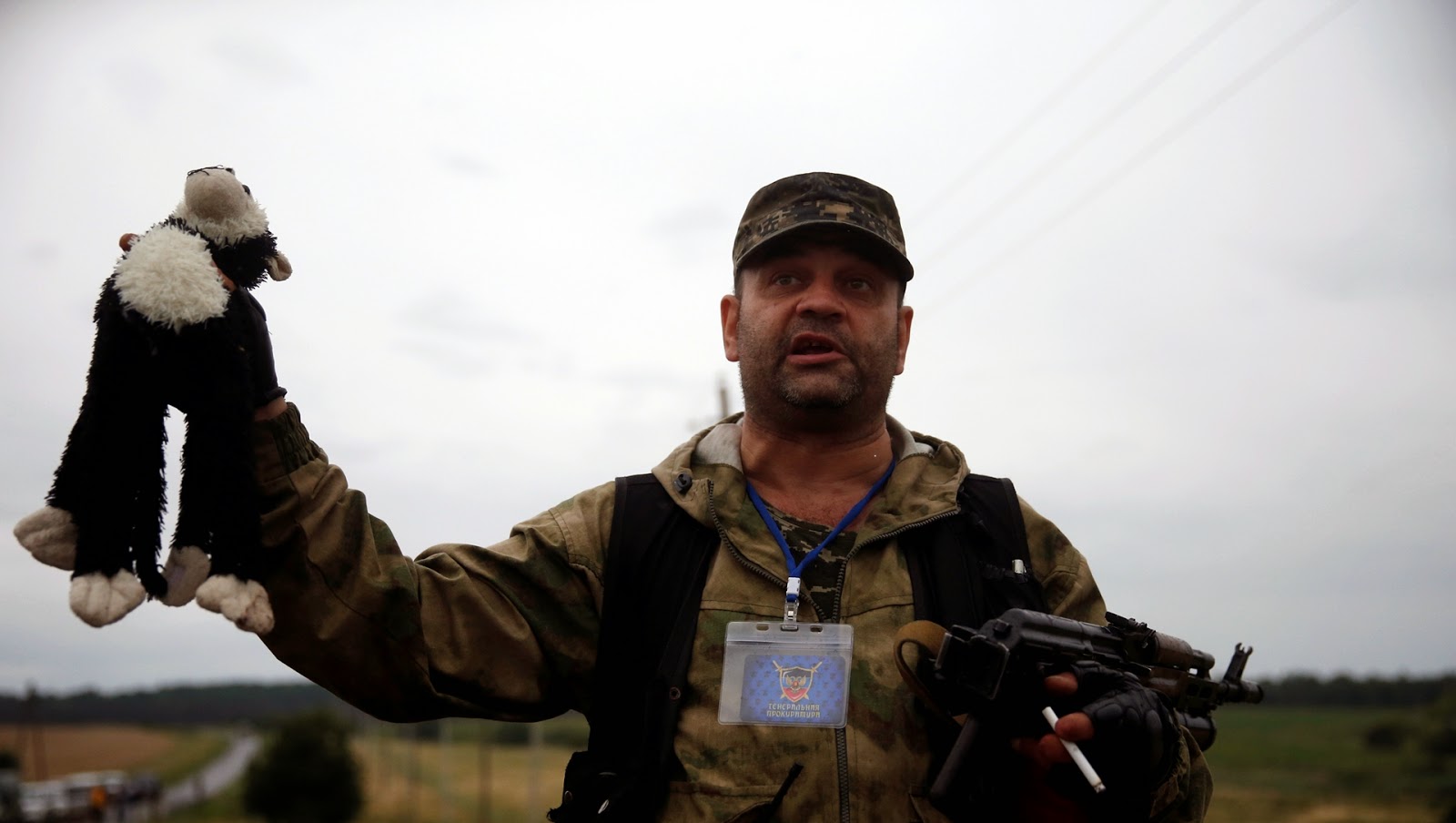 The Russians should not delude themselves by pointing to some European societies that may tend to oppose Western sanctions against Russia – this presumable opposition is driven by economic, rather than cultural, concerns. Moreover, the Europeans who oppose sanctions against Russia due to economic concerns will most likely express even more contempt for Russia because it made them feel uncomfortable as they put profit above liberal values.

Putin may never find his “face-saving Ukraine exit”, but the Russians still can. When Putin annexed the Autonomous Republic of Crimea and said that it “was just like Kosovo’s secession from Serbia”, it all looked like a metaphorical quote from Fyodor Dostoyevsky’s Crime and Punishment: “Shall I dare to stoop down and take, or not? Am I a trembling creature, or have I the right?” (Осмелюсь ли нагнуться и взять или нет? Тварь ли я дрожащая или право имею...). To save their own culture, the Russians need to draw on its vast repository and walk Raskolnikov’s path until the end. Otherwise, “russkiy mir” will destroy Russia.