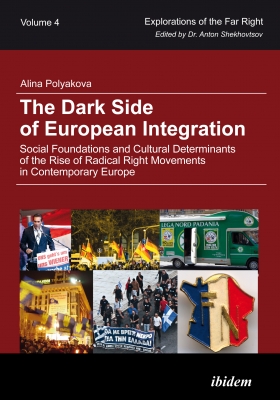 This assessment relies on a detailed analysis of the electoral rise of radical right parties in Western and Eastern Europe. Contrary to popular belief, economic performance and immigration rates are not the only factors that determine the far right's success. There are other political and social factors that explain why in post-socialist Eastern European countries such parties had historically been weaker than their potential, which they have now started to fulfill increasingly. Using in-depth interviews with radical right activists in Ukraine, Alina Polyakova also explores how radical right mobilization works on the ground through social networks, allowing new insights into how social movements and political parties interact.

Table of contents can be found here.

Polyakova's sophisticated exploration of why and how ultra-nationalists succeed challenges widely held assumptions about the determinants of right-wing electoral support and individual radicalization. Her study is unusual in comparing the European far right beyond the borders of the EU and in including field research results from Western Ukrainian provinces. This succinct investigation should find wide attention among researchers of political extremism and will help us better understand the reasons for the current surge of xenophobia across Europe.
Dr. Andreas Umland

Buy the book via ibidem-Verlag or Amazon: UK | France | Germany | Canada | US