Tymoshenko and the Ukrainian radical right

The presidential candidate Yuliya Tymoshenko's links to the Ukrainian far right are often played down. Few people seem to remember that in 1997 Dmytro Korchynsky, a former leader of the notorious extreme right-wing party UNA-UNSO, left his party and organised the so-called "Shield of Fatherland" (Щит Батьківщини) which was deemed to be a "paramilitary" wing of Tymoshenko's party "Fatherland" (Батьківщина). In 2000-2001, during the "Ukraine without Kuchma" campaign, Tymoshenko directed Korchynsky and his organisation to protect the protesters. In 2002 Korchynsky reformed the "Shield of Fatherland" into the "Brotherhood" (Братство) party which was officially registered by the Ministry of Justice in 2004.

Another former leader of the UNA-UNSO (1999-2001), Andriy Shkil, joined the parliamentary group of the Bloc of Yuliya Tymoshenko (BYuT) in 2002 and became an official member of the "Fatherland" party in 2004. Quite soon he was elected to the political council of the party. 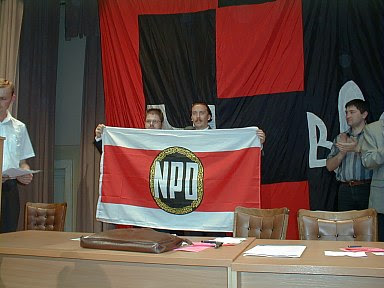 Andriy Shkil (on the right behind the NPD flag) during the
meeting of the UNA-UNSO with the extreme right-wing
Nationaldemokratische Partei Deutschlands (NPD)
in June 2000.

Interestingly, in Lviv the editorial office of the UNA-UNSO journal Nationalist, edited by Shkil, shared the same premises with Tymoshenko's "Fatherland" party. 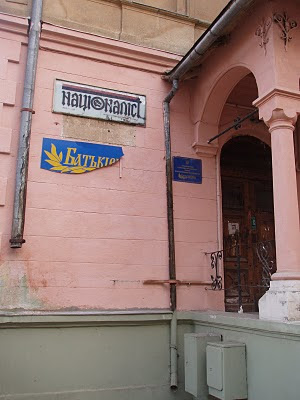 It was Shkil who unambiguously approved Viktor Yushchenko's "Bandera the Hero" act.

On 24 August 2008, Levko Lukyanenko, a prominent member of the BYuT parliamentary group, celebrated his 80th birthday and published a revealing article titled "Ukraine's Civilisational Choice", in the MAUP's anti-Semitic journal Personal Plus. Just an excerpt -

Do we, Ukrainians, people of the white race, want to become different from what we have been, for example, to become black, yellow or red? The cases of marriages of Ukrainian women to representatives of another races indicate that not all [Ukrainians] value their white race. Thus I state my own position: I come out wholeheartedly for the preservation of the Ukrainian people as the white race and ultimately oppose the transformation of the Ukrainian nation into a nation of some blacks, browns or of any indefinite colour.

On the very same day Tymoshenko wished Lukyanenko many happy returns of the day.

Isn't it too much for the democratic (?) and pro-European (?) presidential candidate?
Автор: Anton Shekhovtsov на 14:37